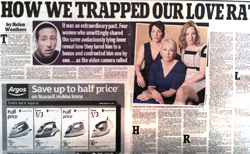 When four women discovered they had unwittingly shared the same lover, conman Simon Reid, 44, they were determined to exact revenge. In an extraordinary pact, the four women lured Simon to a house and confronted him one by one – in front of a rolling camera.

Reid, who had fabricated four different life stories as he juggled his lovers, was jailed for 30 months for fraud and the stills from the moment they confronted him appeared in a number of national newspapers. Suddenly, the women involved found themselves at the centre of a media storm over their story and one of them, Nicola Hilary, phoned Talk to the Press to ask how we could help. We stepped in and set the trio up with a multi media deal which included them being interviewed by the Daily Mail, appearing in three women’s magazines and on BBC Radio Five Live and even flying to New York to appear on the Today show. 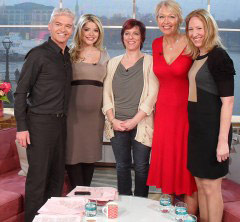 Most excitingly, we arranged for them to be flown first class to New York to appear on the Today show alongside an American victim of Reid’s.

There, they opened up about his deception as they spoke to glamorous White House correspondent Savannah Guthrie, who described Reid as a ‘Jerk’, and were thrilled to meet Minnesotan Andie Nash, another of Reid’s victims.

After the show all four women enjoyed a chauffeur driven tour of the city and splurged in Macy’s before sampling some of the Manhattan’s culinary delights.! The three friends are now back in the UK and filming a documentary. Plus, they are in talks for a film deal about their story. 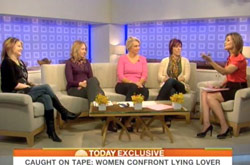 We’ve loved getting to know all four women and if their testimonials are anything to go by, the feeling is mutual. Laura Buckingham says: ‘I have never had any dealings with the press before and I probably would not have followed the story up, but the media interest in the story was fantastic. I was overwhelmed by it all at first, but Kira was amazing. She really looked after us all and ensured we knew what was going on at all times. She was always available at the end of the phone if we had any questions at all. She secured the best people for us to talk to tell our story and arranged newspaper and magazine interviews, and also a slot on This Morning, and NBC news in New York. It is wonderful to know that Talk to the Press is still working for us and trying to secure other deals. I cannot thank Talk to the Press enough for all their help and both Kira and Natasha have been amazing.’ 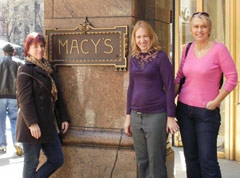 And Minnesotan Andie was bursting with excitement when we touched base with her after the filming for NBC. She says: ‘The NYC trip was fabulous! The best part was getting to meet and hang out with Jo, Nicola and Laura; they are all fantastic women and we all had a great time. Thank you for helping to bring us together!’

It’s enough to make us blush, and we’re glad to have been able to help!