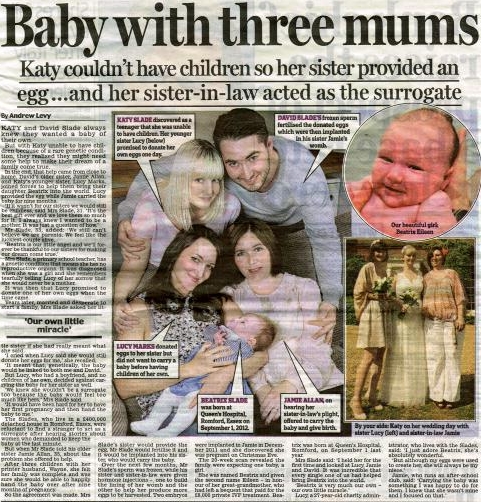 Katy Slade longed to be a mother, but knew she’d never have her own biological child because of a rare genetic condition which meant she was born without any reproductive organs. Now, Katy’s dream has come true and she is mum to baby Beatrix.

And it’s all thanks to a remarkable set of circumstances in which Katy’s sister donated her eggs and her sister-in-law carried the resulting baby which had been created with her own brother’s sperm. As soon as we heard Katy’s story, we knew papers would be fighting over it. By distributing it on the news wires, we secured her coverage in a number of national newspapers, which was swiftly followed by an exclusive interview with the Daily Mail and a tv appearance. Now, the incredible family are due to be in a women’s magazine too.

Growing up, Katy’s younger sister, Lucy, always said she’d donate one of her eggs when the time came as Katy had found out she couldn’t have children when she was just 10 years old.

In 2003, when Katy was 23, she met David, now 33, and the pair quickly fell in love. They looked into IVF and then Katy remembered her sister’s promise. Lucy said she’d happily donate her eggs but didn’t want to carry the baby because she had a boyfriend and that would make it feel like it was hers.

The couple started to look into surrogacy, but read terrifying stories about surrogates dropping out at the last minute or becoming too attached. Then, a few weeks later, David’s older sister, Jamie Allan, now 35, said over dinner that she’d be a surrogate for them.

David brushed it off at the time and thought she was joking. But a few days later, David told Katy what Jamie had said and she asked him to call her and see if she was being serious, which she was.

The couple were delighted. They planned to use Lucy’s eggs and David’s sperm and Jamie as ‘the womb’. In December 2011, Jamie had embryos implanted into her womb and found out she was pregnant on Christmas eve. They found out at the five month scan that they were expecting a girl.

On the first of September 2012, Jamie was induced and gave birth to a healthy baby girl. Katy was the first to hold her and the couple decided to call her Beatrix – after Katy’s nan – as they’d funded the £8,000 IVF through inheritance money left by her. Katy is loving every moment of motherhood.

‘I still can’t believe I’m a mum!’ says Katy, a primary school teacher, who lives with David, 33, a tattoo artist in Romford, Essex. ‘If it wasn’t for our sisters we would still be childless. It’s the best gift ever and we love them so much for it.’

If you have an incredible story about motherhood that you’d like to share, fill out our sell my story form on the right, or email us on message@talktothepress.com