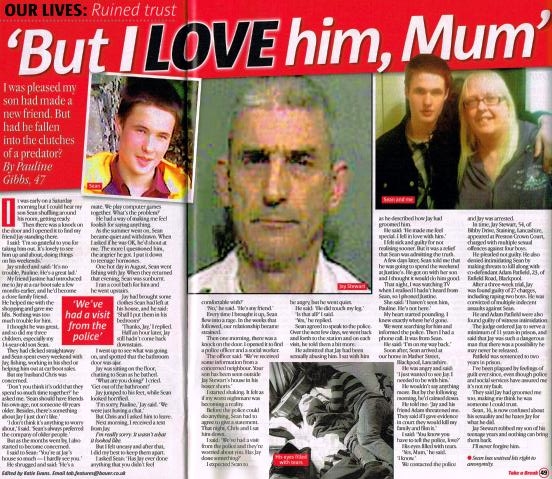 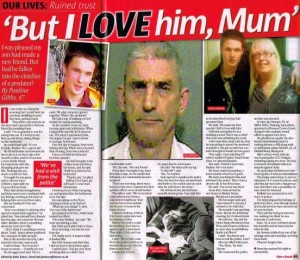 Pauline, 46, is a mum-of-five from Blackpool who found herself living every mother’s worst nightmare when her son was sexually abused by a paedophile last year. Jay Stewart, 54, preyed on young boys who he befriended and Pauline’s son Sean who was just 14 at the time, was his most recent victim.

Earlier this year, Stewart was found guilty of six counts of rape against young boys, 11 of indecent assault, 8 of indecency with children and 11 of sexual activity with a child. He was sentenced to a total of 43 years in jail but is deemed so dangerous that he may never be released.

Now, speaking for the first time, Pauline reveals her torment at discovering what had happened to her son. She says Sean met Jay Stewart through a family friend in May 2010 when they did a car boot sale together, and Pauline says she liked him at first.

Although Stewart was in his fifties and Sean was just 14, Pauline says the older man was like a father figure to her son and they developed a firm friendship. He used to take the teenager fishing and Pauline says she had never seen Sean happier, as her son didn’t have many friends his own age. But she now feels wracked with guilt that she didn’t realise all this time Stewart was grooming her son for sex and would go on to abuse him in the most horrific way.

The first sign that something was wrong was when Pauline got a knock at the door in September 2010 from a police officer from a special sex crimes taskforce explaining they had received an anonymous tip off from Crimestoppers. Pauline was devastated and that evening she sat down and asked her son if it was true that Stewart had abused, but she says Sean went berserk and denied everything as he believed he was in love with Stewart.

But the next day he asked to have a word with his mum and dad and tearfully admitted that Stewart had abused him. Pauline called the police straight away and Sean did a video interview about the abuse, when he started opening up about all the details. Jay Stewart was arrested and bailed – but worse was to come. He threatened Pauline’s other son and said if they told the police anything him and a friend would stab him and kill all his family and video it.

In February, Stewart was convicted at Burnley Crown Court of the abuse dating back several years and last week he was sentenced to 43 years in jail, 11 of which for the 11 counts against Sean. He and an accomplice Adam Patfield were also found guilty of witness intimidation for threatenting Sean. Stewart got another four years for that, while Patfield got two years.

Pauline says she and Sean can move on with their lives now but her son will never be the same and struggles with relationships. They just want to put the past behind them and are glad Jay Stewart has been locked up for a long time. We placed their story in Take a Break magazine.

If you’ve been the victim of a crime and would like to share your story, email us on message@talktothepress.com or fill out the sell my story form to the right.