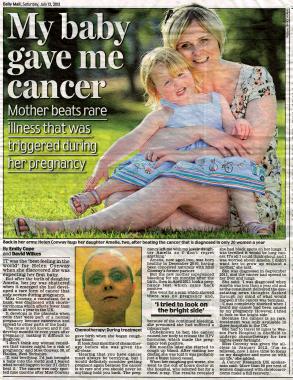 As soon as we heard Helen Conway’s story, we knew a newspaper would be keen on running it, and this weekend it appeared in the Daily Mail. In the article, Helen revealed she was diagnosed with an extremely rare form of cancer – which only occurs in pregnancy and develops in the placenta.

Helen, 38, was diagnosed with stage three choriocarcinoma in September 2011 and underwent three months of chemotherapy. The mother-of-one, who works as a project manager in Halifax, was stunned to be told that she had developed the rare form of cancer, which affects less than 20 people a year, because of her pregnancy with daughter Amelia, now two.

Helen, who has now been given the all-clear, had symptoms which went undiagnosed for more than a year until doctors finally managed to find out what was wrong with her.

After giving birth, her bleeding didn’t subside for months so Helen visited the doctor but was told these symptoms were normal following pregnancy. In April 2011 Helen thought she may be pregnant again so she took a test which came back positive. She went for a scan but it showed there was no pregnancy and, because of the heavy bleeding, Helen presumed that she had suffered from a miscarriage.

But then in September 2011 Helen started to cough up blood. After visiting her GP she was told it was nothing sinister and probably just a burst blood vessel. However unbeknown to Helen and her doctors, Helen was suffering from one of the rarest forms of cancer – choriocarcinoma.

When her coughing began to escalate Helen decided to go to the out of hours doctor at the hospital, who referred her to an assessment unit for a chest x-ray. The x-ray results revealed that Helen had black spots on her lungs. By this time Helen had begun to think the worst, and was convinced she had lung cancer.

But after a biopsy and nine months of waiting in September 2011 Helen was diagnosed with stage 3 choriocarcinoma which had spread to her liver and lungs. This form of cancer develops in the placenta or womb, and can spread to other parts of the body, including the lungs.

Choriocarcinoma causes the body to release the HPV hormone which had caused Helen’s pregnancy tests to come back positive. Only three hospitals in the UK can treat this type of cancer, so in October 2011 Helen was transferred away from her family in Halifax to Weston Park Hospital in Sheffield to undergo chemotherapy. After four months of chemo Helen was cured of cancer in January 2012.

She said: ‘When I was diagnosed I was actually relived. I thought it was going to be lung cancer, which is very difficult to treat and is often fatal. Choriocarcinoma isn’t as hard to cure and although I was shocked at having such a rare form of cancer, I knew I had a good chance of survival.

‘I would definitely consider getting pregnant again because the cancer is so rare and you should never let anything hold you back. At the end of the day the pregnancy left me with my lovely daughter Amelia so I don’t regret anything.’

If you’ve beaten cancer and would like to share your story, email us on message@talktothepress.com or fill out the sell my story form to the right.

Talk to the Press
← Previous Story I’m training to be a lawyer so other victims don’t suffer like I did – The Sun newspaper today
Next Story → If you’re making headlines, when is the right time to talk to the press?