I changed my name by deed poll to match my Facebook profile!

‘I changed my name by deed poll to match my Facebook pseudonym’ – Talk to the Press client tells The Sun about her incredible name change after the social network locked her out of her account. She still can’t get back in! 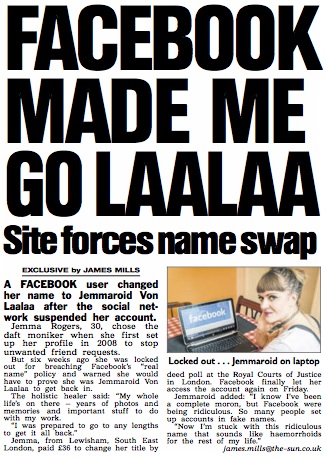 s, she set it up under the pseudonym ‘Jemmaroid Von Laalaa’.

Over the years she posted hundreds of photos and had thousands of messages between her and friends saved in her account.

But when she logged in five weeks ago, she received a message from Facebook saying she wasn’t using her real name and would need to prove she really was Jemmaroid Von Laalaa by providing identification.

Confused Jemma tried photoshopping her pseudonym onto a bank card and sent Facebook a photo – but admits it didn’t look very convincing.

She received another automated message saying her identity could still not be confirmed, and she was locked out her account.

Not only that, but her profile was now suspended meaning she was unsearchable and had lost years of memories, contacts and messages.

Desperately trying to get back into her account, Jemma emailed Facebook with her real ID and explained she had been joking. Again, she received an automated reply. 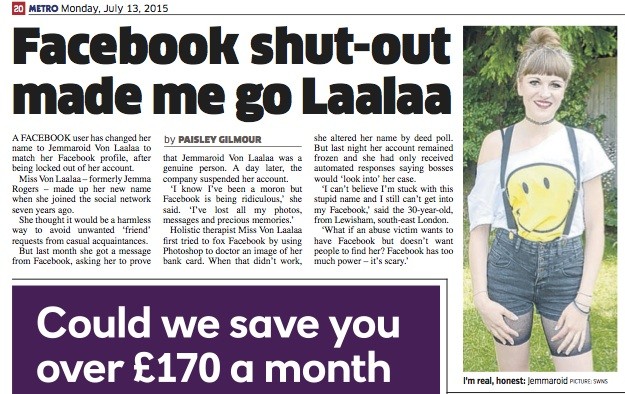 In a last ditch attempt to recover what she had lost, Jemma went to drastic measures and officially changed her name by deed poll to Jemmaroid Von LaaLaa. She even had to register her new name with all of her bank accounts and get new cards reissued with her new name printed on them.

After sending these over to Facebook, she was sent yet another automated reply and still is locked out of her account. She says: “I know I’ve been a completely moron, but Facebook are being ridiculous. I’ve been locked out of my account for five weeks now and have lost precious memories. So many people set up accounts in fake names and I can’t believe I am being punished like this.

“What if a victim of abuse wants to have Facebook but doesn’t want people to find her, so sets it up with a pseudonym? Facebook have too much power and it’s actually quite scary.

“I regret what I did and when I tell people, they can’t believe I’ve been so stupid. Now I’m stuck with this ridiculous name that sounds like haemorrhoids for the rest of my life.”

Have you changed your name by deedpoll?

We’ve printed many stories about people who have changed their name by deedpoll. We often receive stories such as ‘I changed my name to Superman’ and similar stories. We help our clients get the most money for sharing their story, and have fun at the same time. Our service is free to use, so what have you got to lose? Our team would love to hear from you.

To find out more about how to sell a story to the press, see our Sell My Story page: Sell My Story. You can also view a selection of our latest stories, clients, and news below: