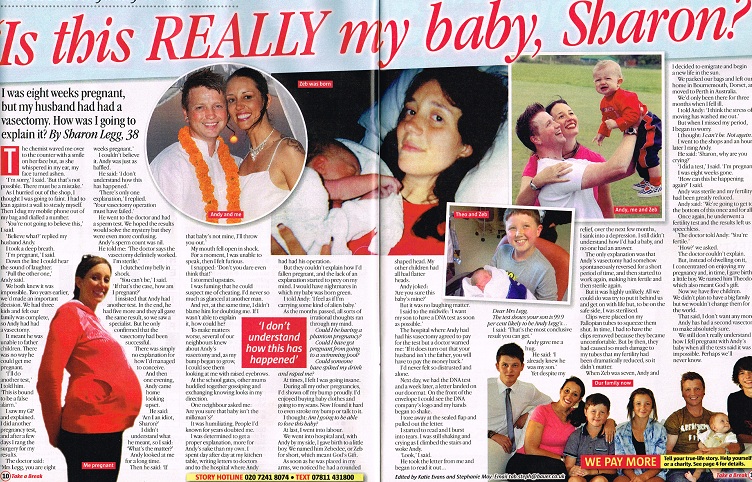 I got pregnant twice – following my husband’s vasectomy 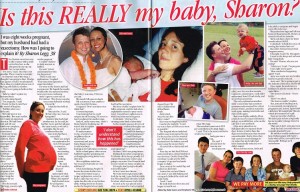 Nine years ago Sharon Legg, 37, made UK headlines when she got pregnant despite her husband Andy having had a vasectomy three years earlier. At first doctors said Andy’s vasectomy could have spontaneously reversed, but five sperm tests showed he was completely sterile and a doctor said Sharon must have cheated on him.

Although the couple had been together since they were 17 and Sharon had never even slept with another man, people were suspicious and Sharon endured nine months of hell with people thinking she had been unfaithful. Even Andy doubted her and it threatened to destroy their marriage.

However Sharon was vindicated when a DNA test after their son Zebedee’s birth showed Andy was definitely the dad. Doctors were baffled as to how it could have happened and Sharon and Andy simply put it down to a one-in-a-million medical miracle.

Assured that Andy was definitely sterile, the couple continued with their lives safe in the knowledge Sharon couldn’t get pregnant again.

But in March this year Sharon was gobsmacked to discover she was pregnant AGAIN! Incredibly, tests this time showed Andy to be completely fertile. Baby Theo was born in October last year – the Legg’s second miracle baby!

We placed Sharon’s incredible story in Take a Break magazine, where she tells how the couple defied the odds to have two miracle babies. Sharon says: ‘They were both big surprises but we wouldn’t change them for the world.’