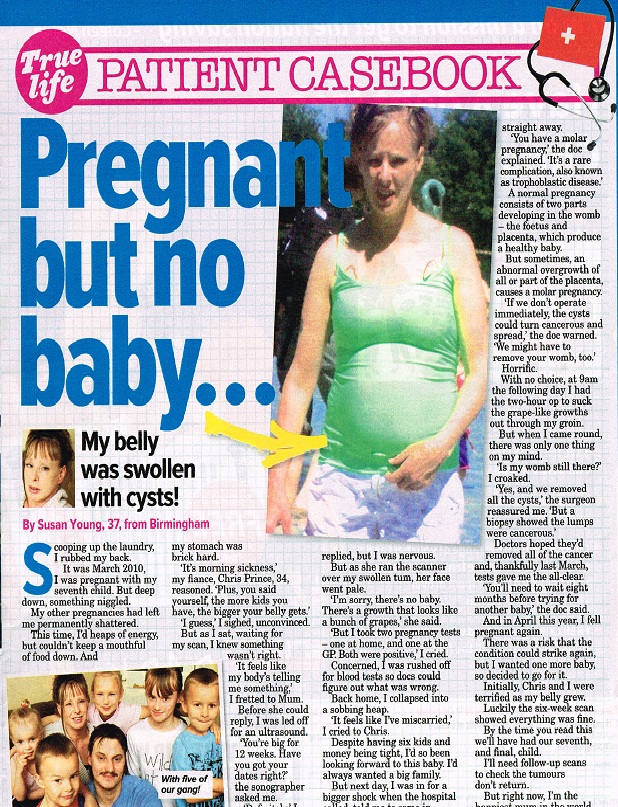 I had a big pregnancy bump – but no baby 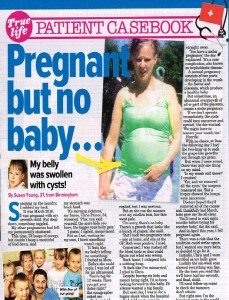 In this week’s Chat magazine, you’ll see TTTP client Susan Young, who looked six months pregnant – but there was no baby. In fact Susan had something called a molar pregnancy, where cysts had developed because of an abnormal conception. It’s a very rare condition whereby the patient appears to be pregnant – and has a bump to show for it.

When Susan discovered she was pregnant in March 2009, she was over the moon. Already a mum of six, she couldn’t wait for the new addition to the family, and a visit to the GP confirmed the happy news.

But at her three month scan Susan, now 37, was given the devastating news that the bump she was showing wasn’t a pregnancy at all – it simply looked like a bunch of grapes.

Susan had an operation to remove the tumour but it was a very emotional time for her and she says it was like mourning for a baby she never had. Susan got in touch as she wanted to raise awareness of the condition and we got her a deal with Chat magazine. Susan was overjoyed last year when she discovered she was now pregnant with her seventh child. She says: ‘Right now I’m the happiest mum in the world.’