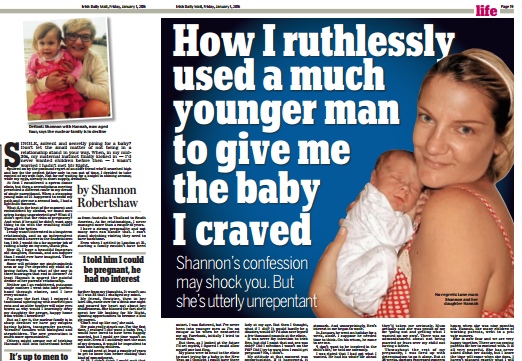 I used a toyboy for his sperm – exclusive confession

Talk to the Press client reveals to the national press how she used a toyboy for his sperm. Tricking him into giving her a baby as her biological was ticking.

At 36-years-old Shannon Robertshaw still hadn’t found Mr Right so, with her biological clock ticking, she decided to take matters into her own hands and used a toyboy for his sperm. Talk to the Press helped secure Shannon a number of exclusive press deals to help her earn the highest fee for her story.

She’d started saving up for artificial insemination, but worried she didn’t have time and couldn’t wait any longer. So she embarked on a fling with a ‘totally unsuitable’ and unsuspecting 21-year-old with the sole intention of getting pregnant.

Unlike most would-be mothers, Shannon didn’t want to raise the child in a relationship – she wanted to do it her way, alone. Now 42, Shannon got her wish and is a single mum to four year old daughter Delphi.

In October 2010, she started sleeping with Ben*, then 21, a guy she’d met through friends. From the offset, Shannon, admin officer from Billericay, Essex, wanted more than just sex – she wanted his sperm.

At first, they used contraception. But on Shannon’s 37th birthday and, seven weeks into their fling, she deliberately didn’t use protection as she wanted to get pregnant. Shannon claims Ben was happy to have sex with her without contraception several times, although she admits that he’s probably too young to fully appreciate the consequences.

In December 2010, Shannon was late on her period. She did a pregnancy test and was delighted when it came back positive. She told a shocked Ben, but didn’t put any pressure on him to be involved because secretly she didn’t want him to have anything to do with it.

She said: “How a 21 year old raises a child and how a 37 year old does would be completely different. I wanted to do it my way!”

“Lots of my friends in their 40s/50s have missed the boat as they were waiting for Mr Right, and he never showed up. They wish they’d done what I did, and admire me for it. I want to warn other women that Mr Right may never materialise so they need to take control of the situation.

“I realise my way isn’t for everyone, but I got what I wanted – and I’m the best mum in the world.”

Where did Shannon’s story appear? 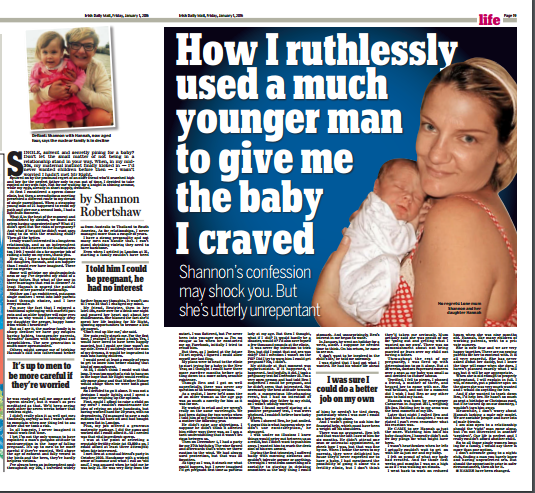 We are now in the process of securing Shannon another magazine deal and as well as a daytime TV appearance.

Would you like to sell your story for cash?

Magazines and newspapers love real life confessions like Shannon’s, so if you have a story to sell and you’d like to find out how much it’s worth, please fill out the Story Valuation form on this page or call 0207 549 5406.

Our service is free and there is no obligation. We’re here to serve you and your information is safe with us until you decide if you want to go ahead.

Recent Talk to the Press clients