I’m growing a nose on my head: Ground-breaking surgery story

Talk to the Press represent brave dad who lost his nose to cancer but is undergoing pioneering treatment to grow a new one on his FOREHEAD. Read Paul’s ground-breaking surgery story… 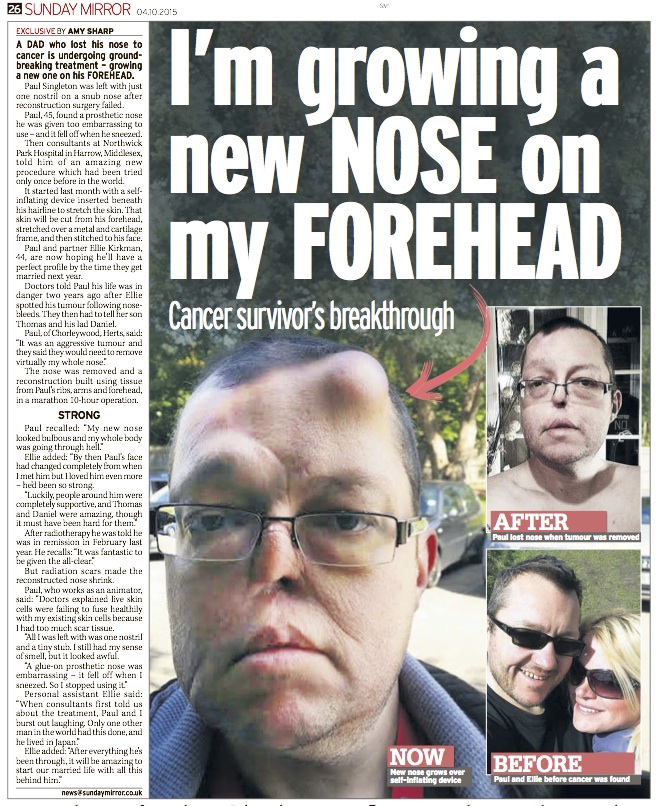 Do you have an amazing, inspiring or interesting story to share? Get it valued for free by one of our experts. Simply give us the main points of the story using the story valuation form on this page, and one of our friendly, trained journalists will get back to you.

When 45 year old Paul Singleton was told he had an aggressive cancerous tumour in his nose in June 2013, he was told the only way to save his life was to have his nose removed.

In February 2014 Paul, who’s a digital designer, was given the all-clear from cancer.

However, the extreme surgery left the dad – who lives in Chorleywood, Hertfordshire – was left with a five-inch scar across his face and a ‘tiny stump nose’ with one nostril.

NHS medics attempted to reconstruct his nose – by taking a skin graft from his forehead, cartilage from his ribs and vessels from his arms – but the nose collapsed within six months.

In July 2014 the pair got engaged – but avoided setting a wedding date until Paul had a nose.

But in March this year, Paul was offered bizarre ground-breaking surgery on the NHS – that would mean growing a new NOSE on his forehead.

In an unbelievable UK first, surgeons at Norfolk Park Hospital told the dad a self-inflating device could be inserted under his forehead, to expand over 90 days and create excess skin.

The skin will then be removed and stitched onto his face over a ‘nose-frame’ made of metal and cartilage – created by specialists in Germany.

Now Paul – who is one month into the treatment – has an egg-sized ‘nose’ on his head.

This November, the dad will go under the knife once again to have it reattached to his face.

Ellie – who’s a personal assistant – and Paul say they are putting their wedding plans on hold until next year, so Paul will have a nose when he says ‘I do’.

She says: “When Paul was told he needed his nose removed, he wasn’t vain about it – he just wanted to survive cancer and be there for our family.

“When doctors said the solution was to grow a nose on Paul’s forehead, we burst out laughing.

“Everything Paul has been through has only made our relationship stronger – and our wedding will be even more special because of it.”

Where did we place Paul’s story?

We placed Paul’s story exclusively with the Sunday Mirror where it appeared as a page lead.

We are now in the process of securing him an exclusive magazine deal, followed by ‘second rights’ deals to maximize Paul’s income.

Do you have a story to sell?

If you would like to know if you have a story to sell please fill out the form on the website with a brief description of your story. Alternatively, if you can call us on 0207 549 5406 and one of our trained team will let you know if it’s a story we can help with.

To read more about how to sell a story to the press, see our How to Sell My Story to the Press page.

You can see a selection of our recent client’s stories, latest news and behind the scenes below…

Paisley Gilmour
← Previous Story Thinking about selling a story? Read this!
Next Story → Want to appear on Jeremy Kyle show (and other TV shows)?