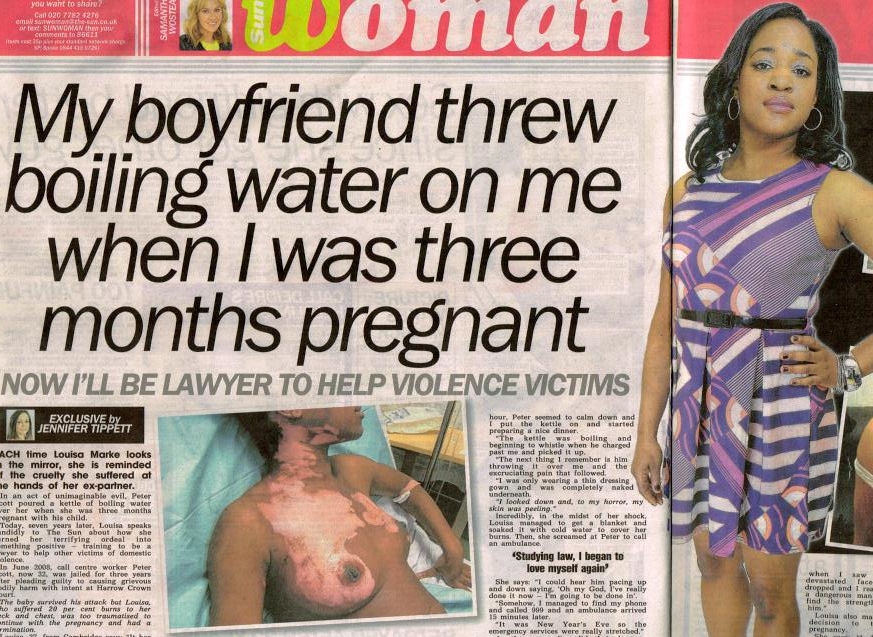 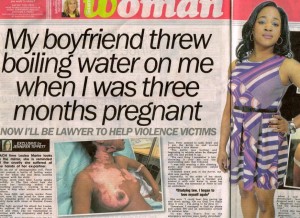 Check out the Sun newspaper today, where on page 34 you’ll find Louisa Marke’s inspiring story of how she’s now training to be a lawyer in order to help other domestic violence victims after her boyfriend poured a kettle filled with boiling water on her, whilst she was pregnant.

Incredibly, the baby survived the attack but Louisa couldn’t go ahead with the pregnancy and had a termination. In June 2008, Peter Scott, now 32, who was working in a call centre at the time, was charged with GBH and sentenced at Harrow Crown Court to three years in prison. Louisa, who’s now 27, is speaking out about the attack to help other victims of domestic violence who may be suffering in silence. In the article, Louisa remembers how at first, Peter was charming and had a great sense of humour. But when they moved in together in 2006 Louisa noticed changes in Peter. He became jealous – even over Louisa’s pet dog, Lady. One evening in 2006, Louisa got home from work and noticed he’d drunk a lot a big bottle of vodka.

Seconds later, he flew off the handle and started smashing her head against a radiator. The next day, Peter cried and begged her to stay with him – promising it would never happen again. Louisa took him back but their relationship was never the same and it became volatile.

On New Year’s Eve 2007, they’d done a big food shop and were planning on having a nice evening in. Louisa was three months pregnant at the time so she wasn’t drinking but he’d bought cider. Louisa was watching Beyonce on TV with Lady on the bed and then Peter said he was taking Lady for a walk. When he came back Louisa noticed he had a knife and the pair started arguing.

After half an hour the argument calmed down and she went into the kitchen to make a cup of tea. She was wearing a dressing gown and was completely naked underneath. The kettle was boiling and beginning to whistle when Peter charged past Louisa and grabbed it.

Then, to Louisa’s horror, he poured the boiling water all over her. She began to scream and battled to get him off. She looked down and she could see her skin on her chest peeling. The pain was excruciating and she screamed at him to call an ambulance. She rushed to the bathroom and filled a blanket with cold water and put it over her burns.

Luckily, Louisa found her phone and dialled 999. She was rushed to Chelsea and Westminster hospital and given morphine. Peter was there the whole time and initially the medical staff believed she’d had a terrible accident and he was playing the role of the worried, supportive boyfriend.

Initially, Louisa was blaming herself and didn’t want to press charges. But when she saw her mother’s devastated face the penny dropped and she realised Peter was dangerous and she had to do something to stop him and reported him to the police. She remained in hospital for three weeks receiving special care and clean dressings to her scars. Incredibly the baby was unharmed but Louisa didn’t want to continue with the pregnancy and have Peter in her life forever so she had an abortion.

In mid-January 2008, Peter was arrested and charged with GBH section 18. He pleaded guilty straightaway. In June 2008, he was sentenced to three years in prison.

Louisa has finally got her life back on track and is studying law at university.

‘I’m in my second year university studying law,’ says Louisa. ‘Everything he put me through made me determined to be a success. One day I’d like to work for the CPS and help put dangerous men behind bars and help other victims of domestic violence.’

If you’ve found a positive from a terrible situation, and would like to share your story, email us on message@talktothepress.com or fill out the sell my story form to the right.