Have you got an amazing social media story? Read Talk to the Press client’s incredible story about how uploading a pic onto Facebook saved her life 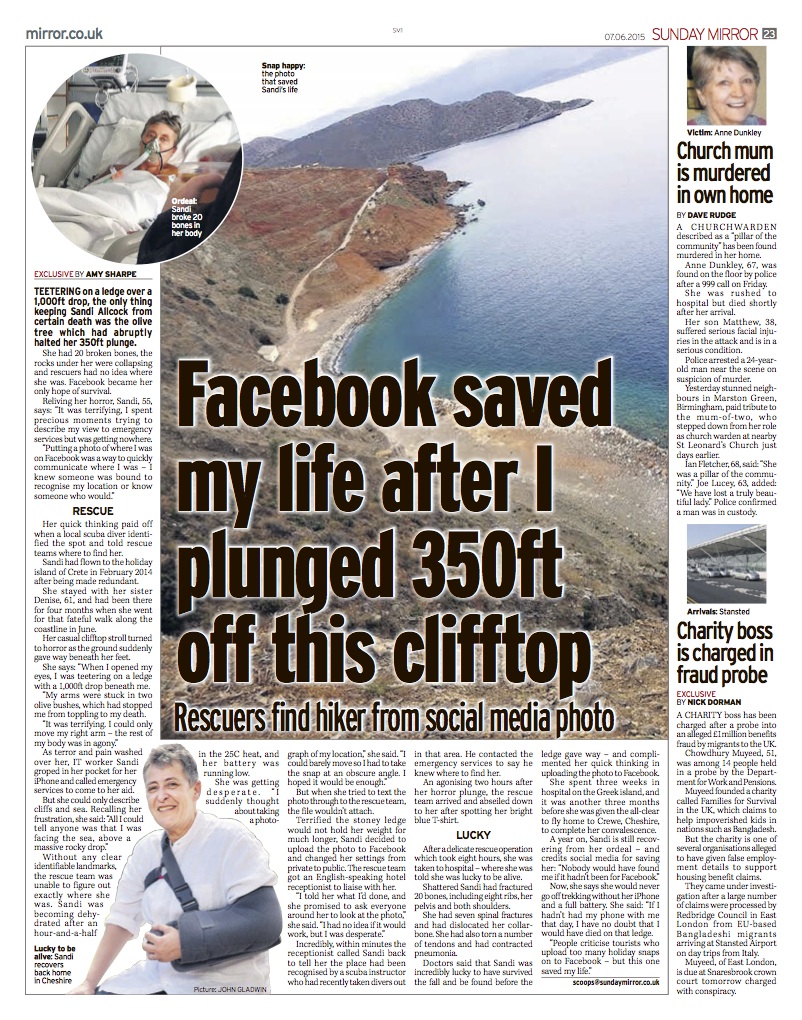 When Sandi Allcock contacted us with her jaw dropping social media story we knew a paper would love to hear it.

In June 2014, Sandi, an IT worker from Crewe, was holidaying in Crete with her sister Denise, 61, when she had a terrifying accident.

Whilst walking along the rocky coastline cliffs alone Sandi slipped and fell 1,200ft down the cliff side – only stopping 150ft from the bottom – after she careened into two olive bushes.

In severe pain and, only able to move her right arm, Sandi managed to wrestle her iphone from her pocket, and tried calling the Greek emergency services, EMAC.

However, the EMAC rescue team were unable to identify her location on the island from her description – as she was only able to describe the rocks and sea.

After speaking to different members of the rescue team, terrified Sandi was at a loss of what to do.

Her description of the cliff edge had no distinguishable landmarks for EMAC to locate her whereabouts, so she called the number of a nearby hotel – but they had the same problem.

Noticing she had wifi, she took a pic of her surroundings on her phone and uploaded it onto Facebook – then she changed the setting to ‘public’ and prayed someone would recognise where she was.

Incredibly, a scuba-diving instructor at the hotel recognised the bay in Sandi’s photo and contacted the EMAC rescue team to inform them of Sandi’s location.

Two hours after she’d fallen, the rescue team arrived at the scene – but it took a further 8 hours to safely remove Sandi from the unstable cliff ledge in her fragile condition.

Local TV filmed the rescue as it was so dramatic.

Sandi was rushed to hospital, where it emerged she had fractured 20 bones – eight fractured ribs, seven spinal fractures, a fractured pelvis, fractures of both shoulders and dislocation of collarbone, fracture of humeral head, a number of torn tendons and she’d also contracted traumatic pneumonia – medics told Sandi she was lucky to be alive.

Getting you maximum coverage for your story

Our aim is to secure you as much media coverage as possible to ensure you make the most out of your story and get paid the best fees.

We placed Sandi’s story with The Sunday Mirror last week and it ran a few days after we placed it. The sooner it runs, the sooner you get paid so it is great it went in so quickly.

We’re now in the process of securing Sandi two magazine deals and a popular daytime TV show have shown interest as well.

Do you have a story to sell to the press?

The best way to find out if you have a story suitable for the tabloid press, women’s weeklies and daytime TV shows is to fill out the quick story valuation form on this page or call 0207 549 5406. Nothing will be printed without your permission and there is no obligation.

Please do not contact any other journalists, agencies or publications directly until we’ve responded as we require 100% exclusivity in order to offer you the highest fees.

You can read more about how to sell a story to the press here, or you can browse some of Talk to the Press’ latest clients, posts and news here:

Paisley Gilmour
← Previous Story Sell a story about my accident: Talk to the Press
Next Story → Sell a story to the Sunday Star: Evil flatmate poisoned me!