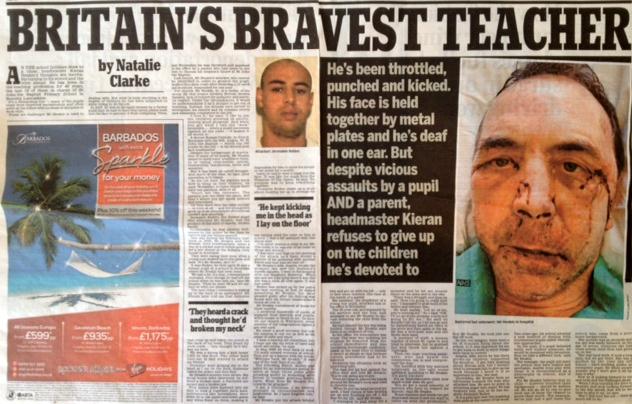 Is this Britain’s bravest headteacher? 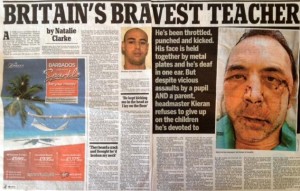 We love an inspirational story here at Talk to the Press, and they don’t come much more inspiring than that of headmaster Kieron Heakin, which we placed in the Daily Mail.

Last month, a father of a primary school was convicted of assaulting a headteacher and sentenced to 16 weeks in prison. That headteacher was Kieran, 60, who has been the head the same catholic primary school in Rochdale for the past 30 years and says he loves his job.

Many of Kieran’s friends and family have urged him to retire – after he was attacked twice in three years because of his job. Kieran first hit the headlines in 2009 when former pupil Jermaine Bullen viciously attacked him outside a takeaway house. He had held a grudge for 20 years and falsely accusing him of caning him when he was six years old.

Kieran was left needing extensive facial reconstruction surgery and had to take three months off work after the brutal attack. He had four metal plates fitted in his head and is now permanently deaf in one ear. He also has no sense of smell or taste. Meanwhile Bullen was convicted of GBH and jailed indefinitely. But incredibly Kieran forgave Bullen because he is a devout Christian and, to his colleagues amazement, he returned to school determined to carry on.

But last year, he became the victim of a second violent attack. In November the father of a ten year old boy attacked him in his office while they were discussing claims his son was being bullied. Kieran says he feared for his life but he managed to get himself free. Last month, the man, who can’t be named to protect the identity of his young son, was convicted of assault and sentenced to 16 weeks in prison. Kieran was left badly bruised and shaken up and police were called, but he says, in keeping with his Christian faith, he has since forgiven the man.

Kieran refuses to let the attacks ruin his life and he insists he’ll carry on working. Kieran says teaching is his vocation and he couldn’t imagine a life without it. He’s been the head teacher at the same school since 1985 and is devoted to his work.

If you’ve got an inspirational story you’d like to share, fill out the sell my story form to the right or email us on message@talktothepress.com

Talk to the Press
← Previous Story TTTP client shares her story with This Morning’s Eamonn Holmes and Ruth Langsford
Next Story → Courage of the identical twin who embraces baldness, whilst her sister retains a full head of hair