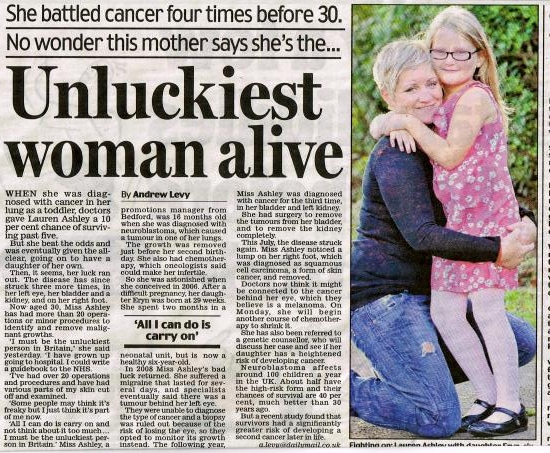 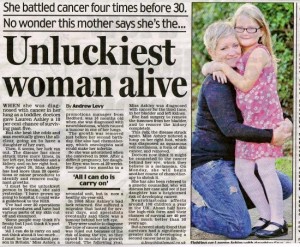 Most people would consider themselves unlucky if they got cancer once in their lives – but Lauren Ashley’s had cancer four times and she’s only 30. Now doctors have referred her to a genetic specialist after dubbing her a ‘cancer magnet’ and we’ve helped Lauren share her story with the Daily Mail.

Lauren was just 16 months old she was first diagnosed with cancer – she had neuroblastoma. She was given a 10 per cent chance of survival and doctors predicted she wouldn’t live beyond five – but against the odds she made a full recovery.

She was in and out of hospital for most of her childhood and underwent dozens of serious operations. Because she’d had gruelling chemotherapy – oncologists thought the treatment would damage her reproductive organs and make it impossible for her to have children when she was older. But in 2006, when she was 24, she fell pregnant. After a very difficult pregnancy her waters broke at 22 weeks and her baby girl was born four and a half months premature.

Like Lauren, she was a fighter and survived and is now a healthy six-year-old.

In 2008, when Lauren was 26, she woke up thinking she had a migraine. The pain didn’t subside after a few days so she went to the opticians who examined her eye then rushed her to hospital with a suspected eye tumour.

Lauren was referred to a specialist and the tumour was diagnosed as a melanoma – the most dangerous type of skin cancer. Then in 2009, Lauren found blood in her urine and doctors discovered she had a tumour in her bladder so she had to have her left kidney removed.

And this summer, Lauren noticed a strange lump on her foot. At first, she thought it was an insect bite but after a few days she went to her GP. Her GP referred her to a dermatologist and tested it and it was a type of skin cancer. Lauren is now receiving radiotherapy.

‘I’ve had over 50 operations in my life,’ says Lauren, 30, who lives in Bedford with her daughter, Eryn. ‘I’d be more surprised if I went to the doctors and they told me there wasn’t a problem with me!’

If you’ve survived an illness and would like to share your story, email us on message@talktothepress.com or fill out the sell my story form to the right.