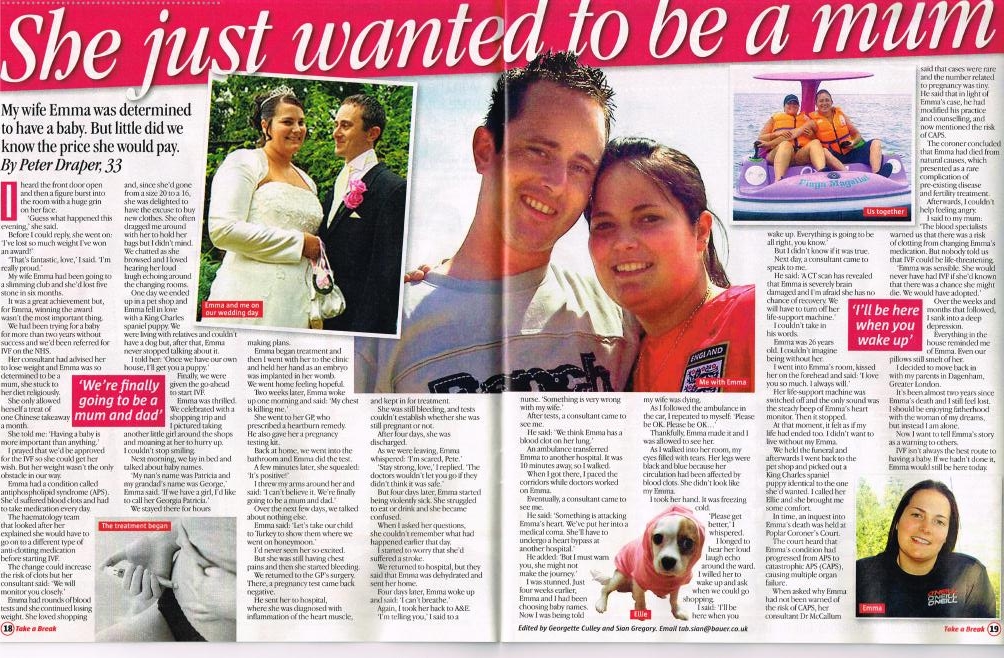 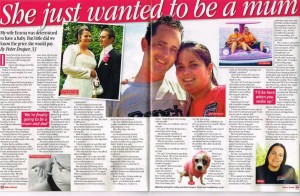 This week, Peter Draper shares his heartbreaking story with Take a Break magazine.

When his wife Emma, 26, started her first cycle of IVF on the NHS in June 2010 she never imagined that the treatment will kill her just a few weeks after beginning her first cycle.

But two weeks after starting treatment, Emma began suffering from bad chest pains. Since the age of 17, Emma had suffered from Antiphospholid Antibody Syndrome (APS) – an illness that affects the immune system and causes blood to clot. Emma’s condition steadily worsened, and she was admitted to hospital. To the couples delight, they discovered the IVF had worked, and Emma was pregnant. But four days after the positive pregnancy test, Emma slipped into a coma. She died in July 2010 and an inquest confirmed she had been killed by a rare complication of fertility treatment caused by her pre-existing condition.

Peter, who met Emma four years ago through friends, says his life stopped at that moment too. The hospital’s own inquest and hearing absolved both the GP and hospital of liability, saying that they had provided Emma with suitable advice and anti-blood clotting medication. Peter maintains that had he and his wife truly understood the risks, they would have adopted and never undergone IVF.

‘I’ve lost the love of my life,’ he says. ‘I wanted to share my story to warn others that IVF isn’t always the easy route to a baby.’

We are now securing newspaper coverage for Peter.

Talk to the Press
← Previous Story Press coverage in the Sun, Telegraph, Daily Mail and Daily Mirror for mum Natalie Tung
Next Story → Still haunted by being attacked by two six stone dogs – and now I’m calling for changes in the law