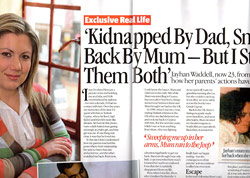 Look magazine – ‘Risked my life to snatch back my abducted daughter’

Georgina Han and her daughter contacted us with their incredible story, and we knew instantly newspapers and magazines would be fighting over it. In 1993, Georgina had made national headlines after staging a daring raid to snatch her daughter back from her ex husband who had abducted her following an international custody battle.

Now, 20 years on, the pair wanted to talk about the legacy of the abduction and snatch back, the rift that has existed between them and how they’ve finally become close again. We sold their story to the Daily Mail, and they also appeared in two women’s magazines.

Talk to the Press
← Previous Story The Sun – ‘I face losing my entire family on the front line’
Next Story → Sunday Mirror – ‘I’m the youngest person in the UK to have a gastric band.’