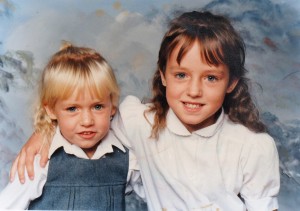 This month, Joanna Dennehy pleaded guilty to stabbing three men and dumping their bodies in ditches in Cambridgeshire. With her sister waiting sentencing, Maria Dennehy, 29, wanted to speak out about her heartbreak, her horror and how she’s finally accepted her new born baby will never have an aunty.

We stepped in to help her manage press attention, and secure her a deal with the Mail on Sunday, and she’ll also be appearing in women’s magazines and on television.

Maria says despite the sisters sharing the same comfortable and stable upbringing, whilst Maria, who used to be a soldier in the army, was fighting for her country in Afghanistan, Joanna had fallen into the dark world of drink and drugs.

The pair were inseparable when they were younger, but at 15, Joanna became involved with drugs and left the family’s £315,000 four-bedroom home in St Albans, Hertfordshire for good.

This year has been bitter sweet for Maria, just four months after finding out her sister was a dangerous serial killer, she gave birth to a beautiful baby girl, Jasmine, now six months.

‘It was difficult,’ says Maria, ‘every time my mum watched me playing with Jasmine she’d well up and say, ‘that’s what I used to do with Joanna. It was gut-wrenching to see my mums so broken and her health has declined as a result. Joanna wanted for nothing growing up, and our parents were honest, hardworking people who did everything in their power to save Joanna from ending up on the streets. She did not come from the broken, troubled home she likes to make out – it was the complete opposite.’

With Joanna making headlines, Maria and the rest of her family received a number of interview requests from the press. Our experience meant we were able to advise the family how to manage press attention, and ensure they got such things as copy approval before the story went to print.

If your family is making news headlines, and you need help managing press attention, get in touch by emailing message@talktothepress.com or fill out the sell my story form on the right.