TTTP helps Mandy Allwood share her story with the Sunday People newspaper, on what would have been her octuplets 17th birthday 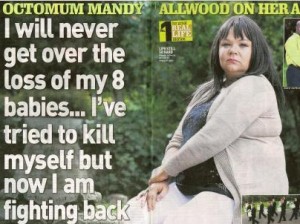 Octomum Mandy Allwood’s eight children would have been 17 this week, and her life full of music, laughter and teenage tantrums. But instead, the 48 year old is still reliving the three days and nights when she gave birth to the octuplets, only for each one to die in her arms within hours of being born.

Their eight coffins were buried in West Norwood Cemetry as the world’s media watched. As Mandy grieved, she was pictured in newspapers across the globe and even appeared on the Oprah Winfrey show. And this week, she appeared in the Sunday People newspaper.

Since losing her babies, Mandy has twice tried to kill herself, suffered numerous bouts of depression and still battles with alcohol addiction.

But this week, on what would have been the octuplets 17th birthday, we arranged for her to share her story with the Sunday People newspaper, as she says she is finally fighting back against her demons.

Mandy, who went on to have three daughters, says she reached her lowest ebb in 2008. She says: ‘I would wake up and have a glass of wine in the morning. I would drink anything I could get my hands on. I was listening to Sinead O’Connor’s Nothing Compares to You over and over and thinking about my babies.’

But in 2009, she was treated for five months at a residential rehab centre. She now has a group of supportive friends and is determined to keep her life on track. She says: ‘Losting my babies was terrible, but I’m turning my life around. Some daysI just can’t speak to anyone, but I say to myself “Come on Mandy, get your slap on, get in that bath and get out.” If I can help other’s now that’s at least something.’

If you’ve recovered from a horrendous event, and would like to share your story, email us on message@talktothepress.com or fill out the sell my story form to the right.