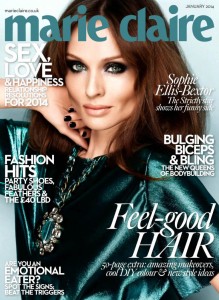 We were thrilled to be able to place our client Kirsty-Joanne Higgs’ story in Marie Claire magazine – out now!

Kirsty-Joanne, 32, bravely chose to undergo a double mastectomy last week after finding out that she had the aggressive BRCA 1 gene – meaning she had an 85% risk of getting breast cancer. Sadly the BRCA 1 gene has caused Kirsty to lose her mother, auntie, grandmother and great auntie to cancer.

The BRCA 1 gene, which is the most aggressive cancer gene, was passed down to Kirsty from her mother, Susan, which was passed to her by her mother, Hazel. The gene means Kirsty has an 85% chance of developing cancer. Kirsty has lost 4 people on her mother’s side to cancer, including losing her mother to breast cancer in March 1996 when she was just 15, and her auntie then died in 2000 also from cancer.

In September 2009, shortly after attending her third funeral for her great auntie, Rene, who passed away from ovarian cancer, Kirsty went to her local GP for a blood test to see if she had the same aggressive cancer gene as her mother, grandmother and great aunt. The results came back positive – Kirsty had the BRCA 1 gene.

Before she could decide what to do, Kirsty’s grandmother, Hazel, passed away in June 2010 at the age of 83 after suffering from breast cancer repeatedly since her 60s. Not wanting to go through the same ordeal as her mother, aunt, grandmother and great auntie, and having now attended four funerals, Kirsty made the brave decision to undergo a double mastectomy at the end of last year.

The operation has seen Kirsty go from a 34E to a 34C and has reduced her chance of getting breast cancer to just 10%.

She says: “When I found out I had the same aggressive cancer gene as the women in my family, I felt numb. It was very upsetting as it brought back memories of all the women I had lost. And I buried the fact away in the back of my mind for six years until I finally decided I couldn’t let this consume me.

“Deciding to have the operation was the hardest thing I have ever had to do. But I definitely feel I have made the right choice. It has been horrible seeing all these amazing women in my life fall victim to the same evil disease, and I didn’t want the same thing to happen to me.

“After the operation knowing that I had greatly reduced my risk of cancer was a massive weight off my shoulder. It’s a shame I won’t have any feelings in my breasts anymore, but it’s a small price to pay for an operation that has potentially saved my life.”

Kirsty-Joanne was keen to share her story to help other women facing the same difficult choice, and Marie Claire was the ideal publication for her to talk to. If you’ve got a story you’d like to share with Marie Claire magazine, email us on message@talktothepress.com or fill out the sell my story form to the right.