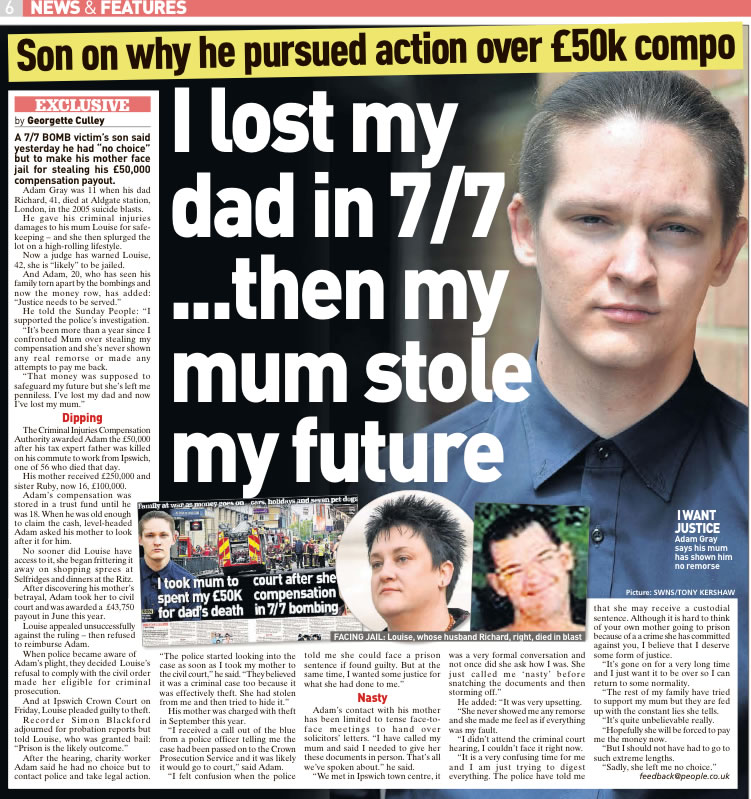 Have you been betrayed by a loved one? 7/7 bomb victim’s son Adam Gray told The Sunday People he had “no choice” but to make his mother face jail for stealing his £50,000 compensation payout. After being caught up in a media storm following the trial, Talk to the Press has helped Adam tell his story, his way.

Adam Gray was 11 when his dad Richard, 41, died at Aldgate station, London, in the 2005 suicide blasts. He gave his criminal injuries ­damages to his mum Louise for safekeeping – and she then splurged the lot on a high-rolling lifestyle. Now a judge has warned Louise, 42, she is “likely” to be jailed. And Adam, 20, who has seen his family torn apart by the bombings and now the money row, has added: “Justice needs to be served.”

He told the Sunday People: “I supported the police’s investigation. It’s been more than a year since I confronted Mum over stealing my compensation and she’s never shown any real remorse or made any attempts to pay me back. That money was supposed to ­safeguard my future but she’s left me penniless. I’ve lost my dad and now I’ve lost my mum.”

The Criminal Injuries Compensation Authority awarded Adam the £50,000 after his tax expert father was killed on his commute to work from Ipswich, one of 56 who died that day. His mother received £250,000 and sister Ruby, now 16, £100,000.

Adam was to be granted access to his trust money in a Bank of Scotland account when he turned 18. But Louise had been secretly dipping into it for shopping sprees at Selfridges and dinners at the Ritz in London. After discovering his mother’s betrayal, Adam took her to civil court and was awarded a £43,750 payout in June this year.

Louise appealed unsuccessfully against the ruling – then refused to reimburse Adam. When police became aware of Adam’s plight, they decided Louise’s refusal to comply with the civil order made her eligible for criminal prosecution. And at Ipswich Crown Court on Friday, Louise pleaded guilty to theft. She offered to repay Adam £10,000 and the rest in installments. He rejected the offer.

Recorder Simon Blackford adjourned for probation reports but told Louise, who was granted bail: “Prison is the likely outcome.” After the hearing, charity worker Adam said he had no choice but to contact police and take legal action. “The police started looking into the case as soon as I took my mother to the civil court,” he said. “They ­believed it was a criminal case too because it was effectively theft. She had stolen from me and then tried to hide it.”

His mother was charged with theft in September this year.

“I received a call out of the blue from a police officer telling me the case had been passed on to the Crown Prosecution Service and it was likely it would go to court,” said Adam. “I felt confusion when the police told me she could face a prison ­sentence if found guilty. But at the same time, I wanted some justice for what she had done to me.”

Adam’s contact with his mother has been limited to tense face-to-face meetings to hand over solicitors’ letters. “I have called my mum and said I needed to give her these documents in person. That’s all we’ve spoken about.” he said. “We met in Ipswich town centre, it was a very formal conversation and not once did she ask how I was. She just called me ‘nasty’ before snatching the documents and then storming off.”

He added: “It was very upsetting. She never showed me any remorse and she made me feel as if everything was my fault. I didn’t attend the criminal court hearing, I couldn’t face it right now.”

“It is a very confusing time for me and I am just trying to digest ­everything. The police have told me that she may receive a custodial sentence. Although it is hard to think of your own mother going to prison because of a a crime she has ­committed against you, I believe that I deserve some form of justice. It’s gone on for a very long time and I just want it to be over so I can return to some normality.”

“The rest of my family have tried to support my mum but they are fed up with the constant lies she tells. It’s quite unbelievable really. Hopefully she will be forced to pay me the money now. But I should not have had to go to such extreme lengths. Sadly, she left me no choice.”

We placed Adam’s story the Sunday People and continue to support him with his media attention. If you’ve been betrayed by a loved one, email message@talktothepress.com and one of our team will get back to you within 24 hours.

Please do not send your story elsewhere until we’ve responded.

You can also read more about how Talk to the Press will protect you from the media spotlight: https://www.talktothepress.co.uk/sell-my-story/how-we-protect-you

Georgette Culley
← Previous Story How to Share a Story with Every Newspaper
Next Story → Comparing Weddings… we all do it!