Talk to the Press client shares her unbelievable memory loss story with The Sun after accident leaves her believing it’s October 15, 2014, every day. 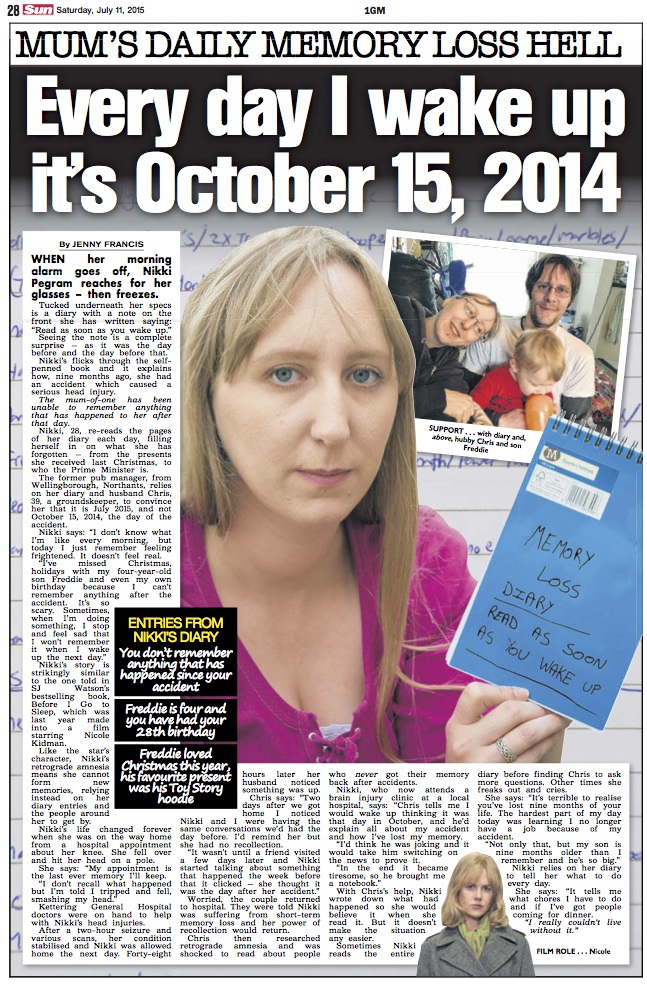 In romantic blockbuster 50 First Dates, Drew Barrymore plays a woman who has to relive the same day over and over again after a car accident leaves her with amnesia.

Since passing out and banging her head in October 2014, the mum-of-one wakes up every day thinking it is the following day.

Each morning, with the help of her partner Chris, 39, a groundskeeper, Nikki has to learn that in fact it is nine months later and she has been diagnosed with retrograde amnesia.

After Chris spent hours every morning explaining what had happened, and trying to convince his partner that he wasn’t playing a prank on her, he started a memory notebook for Nikki that she reads every morning. The notebook is the first thing Nikki will see each day, and it explains in her own handwriting what happened to her.

Each morning, she discovers that it is now 2015 and that she no longer has a job, and that her son Freddie is now four years old. Amazingly, Nikki has missed Christmas Day, family holidays and even her own birthday. She also has no idea the royal baby has been born, that Zayn has left One Direction or that we now have a Conservative government.

She says: “Every morning when I wake up, I have to relive the accident again. It’s so distressing because I think I’m just waking up on a normal day.

“Luckily, I have my notebook which explains what I’ve been through. But it’s traumatic to read because I find out I’ve lost my job, my memory and even little things like my cat has died.

“The worst part is that I’m missing my son growing up. I can’t remember anything that has happened since the accident in October 2014, so I feel like I’m missing out on his childhood.

Chris says: “It has been a distressing nine months. It really struck me when I was helping Nikki fill in her age on a form and she wrote 27. I had to explain to her that she was actually 28 and we were actually in 2015.

“Telling your partner that she has missed Christmas Day and her son’s birthday is just awful. Nikki woke up on Boxing Day and cried for hours because she had missed Christmas. I hate to see her go through it. Doctors say her amnesia is only temporary and that she will get her memory back one day – we just don’t know when.”

Have you been through something similar and want to share you story? Do you even have a memory loss story of your own?

You can also read more about selling a story to a newspaper or magazine on our Sell My Story page. Or, you can read some of our recent client stories, news and blog posts below:

Paisley Gilmour
← Previous Story I changed my name by deed poll to match my Facebook profile!
Next Story → How do I sell my kiss n’ tell story?