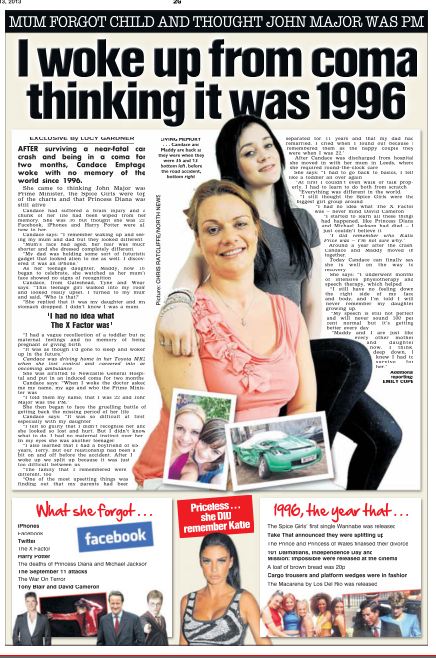 Incredible story of mum who wakes up from a coma, and thinks it’s 1996 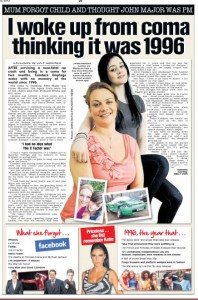 Following a car crash three years ago, Candace Emptage woke up from a coma thinking it was 1996 and she was only 22. She had no memory of her own daughter, believed Princess Diana and Jade Goody were still alive and that the Spice Girls the top girl band.

She didn’t even know that her own parents were divorced, or that her father had remarried. But in an incredible story, which we placed in the Sun newspaper, Candace has now pieced her life back together again.

Candace, now 38, was in a coma for two months with severe brain injuries after her sports car collided with an ambulance in September 2010. Her family feared the worst and believed she would die. But on the day doctors were due to turn off her life support machine – the former model and animal sanctuary worker touched her face and showed signs of life.

But the coma had destroyed 14 years of her life. At the age of 36 the mother-of-one had to start all over again.

In August 2011, almost one year after the crash, Candace moved back into her house with Maddie. Carers still visited her a few times a day but she was constantly making progress. She had a lot to learn about her daughter and found it difficult adjusting back into the motherly role – but now they’re back to normal.

Candace gets upset that she can’t remember special events in her life – such as Maddie’s birth and first birthday but she hopes with time more memories will return. Incredibly, Candace is driving again and now visits hospitals where she helps other brain injury patients.

She’s determined not to be afraid of life and thinks she’s stronger than ever now.

‘I’ve come so far since the accident,’ says Candace. ‘No one thought I was going to survive but here I am. Trying to adjust to life 14 years into the future was strange. All my family looked like they had aged overnight, I had no idea what an iPhone was and the words Facebook and Twitter meant nothing to me. I didn’t even know Michael Jackson had died! But I’m getting better every day.’

If you’ve lost your memory, or experienced memory loss, and would like to sell your story, fill out our sell story form to the right, or email us on message@talktothepress.com

Talk to the Press
← Previous Story If you’re making headlines, when is the right time to talk to the press?
Next Story → Can an affair save a marriage? Our clients think so, and we helped them sell their story to the Daily Mirror