Nearly killed by MRSA, but my life was saved by revolutionary copper pyjamas 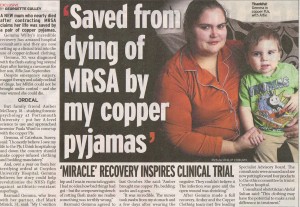 It was supposed to be the happiest moment of Gemma Wilby’s life, but giving birth to her first child nearly killed her after she contracted MRSA. Heartbreakingly, the 30-year-old picked up the deadly infection whilst undergoing an emergency c-section.

Instead of enjoying the early stages of motherhood, Gemma was fighting the flesh eating bug which spread aggressively 10 inches across her stomach and was eating her alive. Incredibly, despite life-saving surgery, maggot therapy and a cocktail of daily drugs, it was a pair of copper-infused PJs that Gemma believes really saved her life.

Over the years, copper has become an increasingly popular component in health products. Already, in countries such as Japan, hospital staff and patients wear copper-infused clothing as a matter of course.

As soon as the company who are pioneering the revolutionary copper pyjama’s got in touch to tell us about Gemma’s incredible success story, we knew we would be able to get them huge coverage. We secured them coverage in the Sunday Mirror, and a women’s magazine as well on the Mail Online, and Gemma was paid for sharing her story too.

Today, a year one from the terrifying ordeal, Gemma is thrilled that Croydon University Hospital are trialling the pioneering clothing after hearing her success story – believing it could revolutionise the NHS and help in the fight against MRSA.

Speaking from her home in Caterham, Surrey, she says: ‘Hospitals up and down the country should make copper-infused clothing and bedding mandatory for all staff and patients. I was so terrified I was going to die I couldn’t bond with my newborn baby. Every time I looked at him, I wondered if he’d soon be motherless. It was an horrific time and I honestly believe that I owe my life to the PJs.

‘If it hadn’t have been for them I don’t think I’d be here today. I had maggots placed into my stomach to eat away the rotting flesh and surgery to cut away at it, but it only really improved when I started wearing the PJS. I wouldn’t take them off after that. I’m really glad that they’re now being clinically trialled.’

If you’re a company who have invented a miracle product and you’d like to secure coverage for your work, then please email us on message@talktothepress.com or fill out the sell my story form to the right.