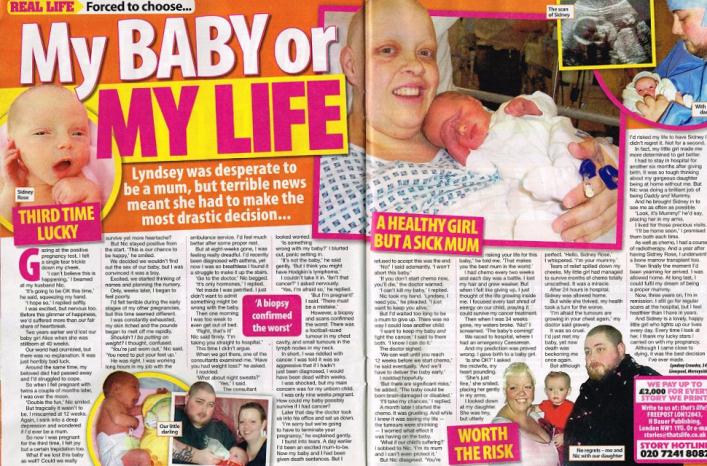 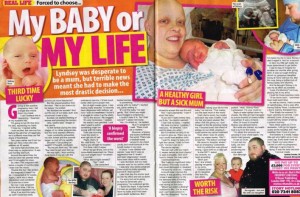 Lyndsey Crowder got in touch with us as she wanted to share her incredible story and this week she appears in That’s Life telling how she faced an agonising decision when she was diagnosed with cancer – to choose her baby or her life.

Lyndsey, 34, was just eight weeks pregnant when she was diagnosed with Hodgkin’s lymphoma. She had a football-sized tumour in her chest cavity and tumours in the lymph nodes in her neck and the cancer was so aggressive, doctors said she may only have lived a few more weeks if she hadn’t gone to hospital when she did.

But for Lyndsey, the most devastating thing was the news she may have to terminate her pregnancy. After suffering two previous miscarriages, Lyndsey says this is not something she or her husband Nic would even consider.

The doctors explained that Lyndsey could have chemotherapy while she was pregnant but warned her the baby could be brain-damaged or disabled, but she decided it was worth the risk to give her child a chance at life. The mum-to-be started undergoing chemo at 12 weeks pregnant, and continued every two weeks for the duration of pregnancy, and she watched in horror as her hair fell out and she suffered agonising sickness.

But Lyndsey says it was all worth it. Her daughter Sidney-Rose was born at 34 weeks and was totally unscathed – despite enduring months of aggressive chemotherapy while she was in the womb.

Lyndsey wasn’t so lucky, and had to remain in hospital for the next six months as the pregnancy had made her weak and delayed her recovery. As well as chemo, she had a course of radiotherapy and a year after giving birth she underwent a bone marrow transplant.

Now, three years on, Lyndsey is in remission – and she says she doesn’t once regret the decision she made to carry on with her pregnancy. We sold her story to That’s Life magazine and she earned an excellent fee.

‘Sidney lights up our lives every day,’ she says. ‘Every time I look at her I thank my lucky stars I carried on with my pregnancy. Although I came close to dying, it was the best decision I’ve ever made.’