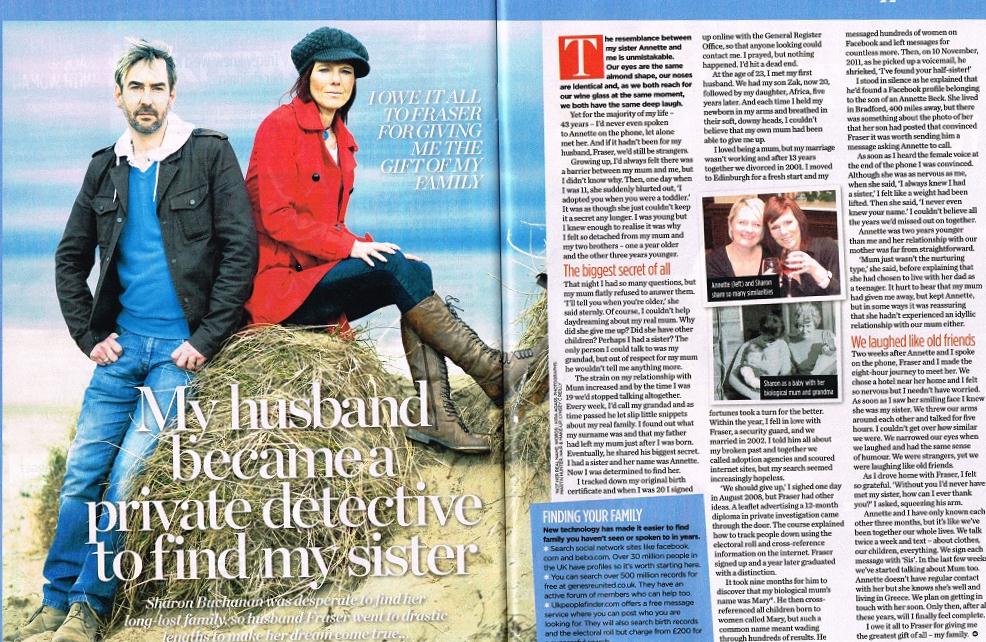 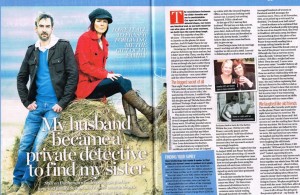 Fraser and Sharon Buchanan got in touch with us as they wanted to share their remarkable story of how Fraser retrained as a private detective in a bid to find his wife’s long lost family, and today Sharon’s amazing story appears in Woman magazine.

Sharon, now 43, was just 11 when she discovered she was adopted and the age of 19 her grandfather dropped the bombshell that she had a sister called Annette, who she had no idea existed.

But although Sharon got hold of her original birth certificate and the age of 20 and desperately tried to track down her sister, she hit a dead end. She went on to get married and have two children but moved to Edinburgh for a fresh start after divorcing her first husband.

That’s when Sharon met Fraser. She told him about her past and together they scoured adoption agencies and internet sites, but their search was fruitless. But one day in 2008 Fraser came across a leaflet advertising a 12-month diploma in private investigation. He embarked on the course, graduating a year later, and then set about trying to find Sharon’s mum and sister.

It took three years to track down Sharon’s relatives but in 2011 came the breakthrough, when Fraser found Sharon’s half-sister Annette on Facebook after contacting hundreds of women. Just two weeks later, Sharon met her younger sister in a hotel for an emotional reunion, and they hit it off immediately.

Sharon admits she may never have found her long lost sister if it wasn’t for Fraser’s incredible detective skills. She says: ‘I owe it all to Fraser for giving me the greatest gift of all – my family. Annette and I have only known each other three months, but it’s like we’ve been together our whole lives.’

If you’ve got an incredible story you’d like to share with a women’s magazine, email us on message@talktothepress.com

Talk to the Press
← Previous Story Meet the incredible triplets – born 4 years apart…..
Next Story → ‘I got a higher fee with Talk to the Press than going direct to a newspaper’