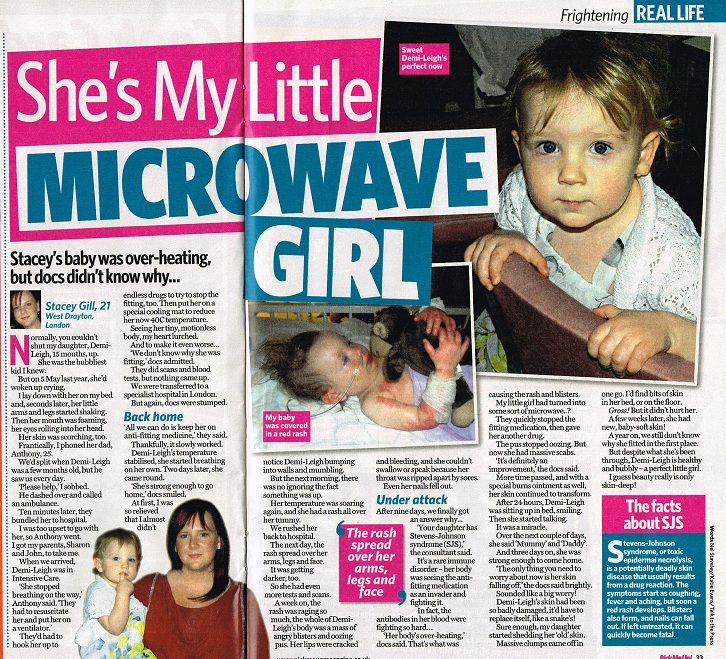 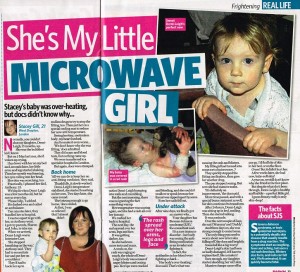 Stacey Gill contacted us as she wanted to raise awareness of a rare skin condition, Stevens-Johnson syndrome, which left her two-year-old daughter Demi-Leigh fighting for her life in hospital.

Demi-Leigh was a perfectly healthy toddler when she suddenly came down with a high fever and started fitting in May last year. She was taken to hospital, where doctors prescribed a drug used to treat epilepsy. The fitting stopped and Stacey was relieved when she was told she could take her daughter home.

But within hours, Stacey, 21, realised something wasn’t right. Demi-Leigh’s speech was slurred and she kept falling over. After several visits to A&E, Demi-Leigh was admitted back into hospital when her temperature soared to 40c.

Two days later Stacey started to really worry when she noticed her daughter’s skin looked like it was sunburnt and big raw blisters had begun to form on her body. Soon Demi-Leigh had started to shed her skin like a snake.

She was admitted to a hospital for infectious diseases where doctors diagnosed her with Stevens-Johnson syndrome, or SJS, a rare reaction to medication which causes the skin to fall off.

By this point, the little girl was in a terrible state and Stacey was beside herself with worry. She says it looked like she’d been pulled from a fire as her whole body was red raw and her lips were bleeding. She couldn’t even cry and could barely manage a whimper as her mouth was filled with painful blisters.

Doctors immediately took Demi-Leigh off the drug and she was put on medication for the SJS and her whole body wrapped in bandages. They explained she would shed her skin like a snake, as she began to lose her hair, toenails and fingernails as her skin shed in preparation for new skin.

Gradually Demi-Leigh began to get better, and she was discharged two weeks later. Thankfully she made a full recovery. Stacey says: ‘I just want to warn other mums of this rare condition.’

We sold Stacey’s story to Pick Me Up magazine. If there’s a health condition you’d like to raise awareness of, email us on message@talktothepress.com or fill out the sell my story form to the right.

Talk to the Press
← Previous Story Our wedding was gatecrashed – by the Olympic torch team!
Next Story → Branded a racist – when I complained about an incompetent nurse