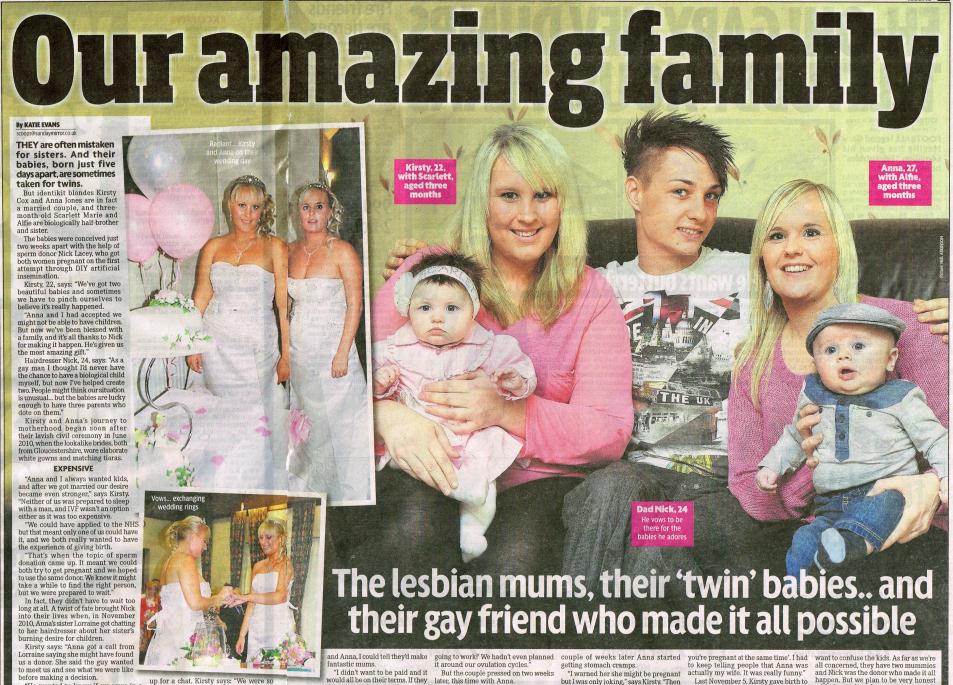 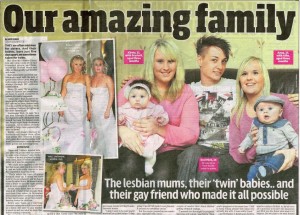 Out and about with their babies, Kirsty Cox and Anna Jones are often mistaken for sisters. But in fact they are a married couple, and their babies are brother and sister. Babies Scarlett-Marie and Alfie were conceived just two weeks apart with the help of sperm donor Nick Lacey, who incredibly got both girls pregnant by DIY artificial insemination on the first attempt!

Kirsty, 22, and Anna, 27, contacted us as they wanted to share the story of their amazing modern family and this week their story appeared as a double page spread in the Sunday Mirror, where the couple told how they found a donor purely by chance after Anna’s sister Lorraine introduced them to her gay hairdresser Nick, 24, who was considering becoming a sperm donor. Kirsty says: ‘The story in the Sunday Mirror was lovely and we’re all happy with it. We’ve got two beautiful babies and sometimes we have to pinch ourselves to believe it’s really happened. We’ve been blessed with a family and it’s all thanks to Nick for making it happen. He’s given us the most amazing gift.’

As both Kirsty and Anna both wanted to experience giving birth, they decided to take it in turns to try and get pregnant, and they started trying in January last year using a syringe to artificially inseminate Kirsty with Nick’s sperm. Two weeks later they did the same for Anna, but neither of them expected it to work. They imagined they would be trying for at least a year before one of them fell pregnant.

But amazingly, Kirsty fell pregnant on the first attempt, and they were shocked when two weeks later Anna also missed her period and discovered she was expecting. In November last year Kirsty gave birth to daughter Scarlett-Marie, and just five days later Anna gave birth to a son Alfie. Although Kirsty and Anna consider themselves the babies’ mums, donor Nick also plays a big part in their lives and visits every week.