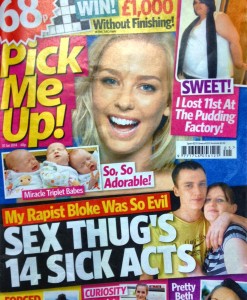 Kira Dixon, 28, from Methilhill, is the main victim of sex beast David McDougall, who shockingly raped a woman just FIVE days after being released on bail following his attacks on Kira. Meanwhile, Kira had been repeatedly raped by her sex-beast boyfriend, who last month was branded a ‘risk to every woman he meets’ as he was found guilty of rape.

After finding the courage to report her on-off boyfriend David McDougall, 31, from Fife, to the police he was arrested – but just five days after being released on bail he raped another woman. McDougall, 31, is now facing a long spell in prison after being found guilty of six rapes as well as other serious offences and physical assaults, which date back to 1998 and include kicking Kira in the stomach while she was 6 months pregnant.

Kira says she is ‘sickened’ that such a dangerous criminal was released on bail, and is calling for stricter regulations when it comes to allowing criminals bail. The mother-of-two’s shocking story comes just after disturbing new figures revealed criminals on bail commit an average of two rapes a week.

In the wake of this, Kira, 28, from Methilhill, wanted to waive her right to anonymity to raise awareness about the necessity for stricter bail conditions for dangerous criminals and says that violent criminals and sex beasts must be held on remand after arrest because of the risk of reoffending. We knew a woman’s magazine would be interested in her story, and we secured her a deal with Pick Me Up magazine. Her story featured on the cover of Pick Me Up magazine.

Mother-of-two Kira met McDougall though mutual friends in 2003 when she was just 17, and they started dating soon after. But they split less than a year later after Kira discovered he had another girlfriend at her 18th birthday party. Kira went onto meet another partner and they had a child together Lucy, now 8. But in 2009 Kira and McDougall rekindled their relationship after the vile sex beast hounded her via email and text, begging her to take him back.

In 2010 the pair moved in together, but soon McDougall began assaulting and raping Kira on a monthly basis. Things escalated when Kira fell pregnant with McDougall’s child in June 2011. Throughout her pregnancy, McDougall continued to manipulate and intimidate Kira, often being violent but then sending her texts saying he loved her as well as flowers. Terrified for her and her baby’s life, Kira rang the police but later dropped the charges because she was too scared of her boyfriend.

But in April 2013, Kira hit breaking point. Bravely, Kira went to the police again who arrested McDougall a few weeks later after launching a sting operation behind his back after it was revealed two other woman had come forward saying McDougall had raped them. He was arrested and freed on bail, pending trial on other rape charges. But just five days after being released on bail McDougall raped another young woman.

At the start of the trial McDougall faced 35 charges which included allegations of drug possession and having child pornography on his computer. Some of the charges were dropped during the trial due to lack of evidence, but he was found guilty of 14 offences, including six charges of rape.

Kira says: ‘I thought it was just me that he had raped, and like all victims of abusive relationships, I thought I had done something to cause him to be like that to me. I felt sick to my stomach when I realised he had done it to other women. I wish I had come forward earlier to try and save anyone else from going through what I have been through.

‘He’s a sick, manipulative man. I’m glad I found the courage to come forward, but it is disgraceful that after I reported him he was given bail. They knew he was a dangerous man and that poor woman wouldn’t have been raped if he has stayed behind bars.’

If you’ve got a story you’d like to sell to Pick Me Up! magazine, contact us on message@talktothepress.com or fill out the sell my story form to the right. We will get you a great deal for your story with Pick Me Up magazine

Talk to the Press
← Previous Story TTTP client shares her story of being dumped by her toyboy lover with the Daily Mirror
Next Story → Sell a story to Reveal magazine – my GP thought I was a grumpy teen, in fact I had cancer