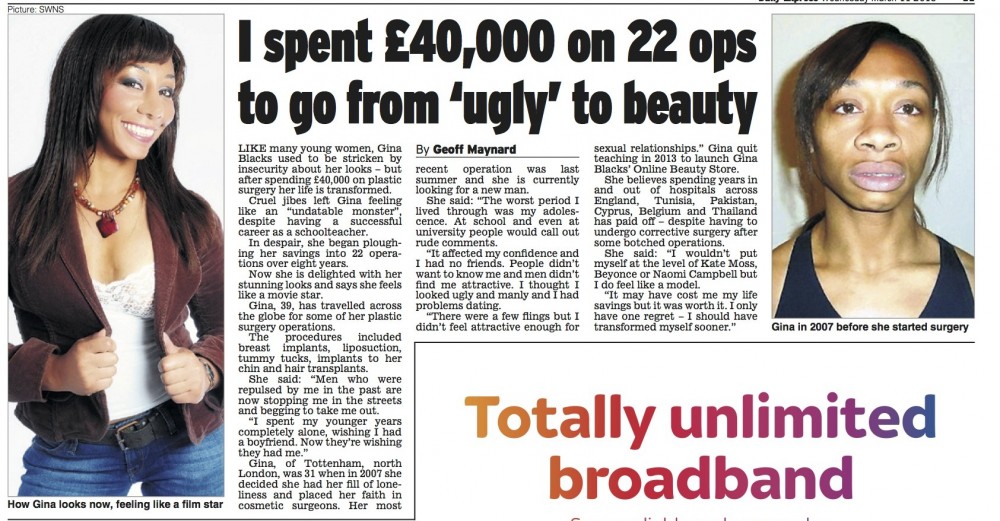 Have you spent thousands on a plastic surgery transformation? Talk to the Press client Gina Blacks spent 40k on 22 different operations to make herself ‘beautiful’

When Gina Blacks, 39, looks in the mirror she barely recognises the beautiful face staring back at her. Since she was a little girl, the former teacher, from Tottenham, North London, was bullied for her ‘ugly’ and ‘manly’ appearance. Strangers would shout at her in the street, men ignored her and school children called her ‘rubber lips’. People even told her she looked like a ‘man’ and no one would ever want to go out with her.

The cruel jibes made her insecure and ‘undateable’ – meaning she didn’t lose her virginity until she was 24. She saw herself as a ‘monster’ and even family and friends told her she was ugly.

She said: “I’d never been pretty or girly. In school I was always the ugly one and this followed me into my 20s. I couldn’t wear pretty dresses or clothes because I hated my body and no amount of make-up would make a difference. I always knew that when the time came I would go under the knife, and I did.”

In 2007, age 31, she decided to change her appearance once and for all – and underwent drastic measures by ploughing £40k of savings into 22 cosmetic procedures over the course of eight years.

Working hard as a teacher, and having no boyfriend or friends to spend her money on, she managed to save up enough cash to undergo a complete transformation. Spending eight years in and out of hospitals in excruciating pain, she now says it was worth every penny and tells how she has gone from ‘monster to movie star’.

She says: “Men who were repulsed by me in the past are now stopping me in the streets and begging to take me out. I spent my younger years completely alone, wishing I had a boyfriend. Now they’re wishing they had me. I don’t even remember the girl I used to be, yet recognise her.”

Gina says men fall at her feet and she has been on 30 dates since her last surgery in March 2014. She has had the final laugh and has now set up her own business advising women who are considering going under the knife.

She said: “I wanted to help other women who are considering going under the knife abroad. It’s so expensive in this country but knowing the reputable places abroad to go would have helped me.

“The surgery may have cost me my life savings but it was worth it. I only have one regret, I should have transformed myself sooner.”

If you’ve undergone a plastic surgery transformation, we’d love to hear from you. Please fill out the quick story valuation form on the right hand side of this page to contact our team. We guarantee the best service and the highest fees possible.

Paisley Gilmour
← Previous Story The world’s most dedicated superfan?
Next Story → Clarke Carlisle attempted suicide… by jumping in front of my lorry