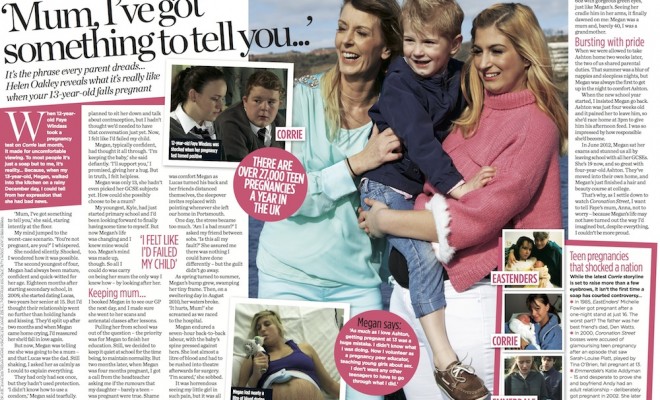 Pregnant at 13; Give 10 year olds the contraception pill

Talk to the Press client tells Woman Magazine how 10 year olds should be given the contraception implant at 10 after her daughter fell pregnant at 13 years old.

Earlier this year NHS figures revealed girls as young as 10 were getting contraceptive implants fitted on the NHS. The statistics showed that almost 10,000 implants have been given to girls below the age of consent. Doctors and charities have spoken out warning of the long-term effects since the implants have never been tested on under 18s.

Here one mother Helen Oakley, 45, a carer, tells how she believes pre-teen girls should be given contraception after her daughter Megan, now 19, fell pregnant at 13.

Helen told Woman the heart-breaking moment Megan came home from school and, still a child herself, broke the news to her. She told how she didn’t realise unprotected sex would lead to pregnancy because she hadn’t had sex education at school or with her daughter.

Giving birth to Ashton-Tyler in 2009, the single mum managed to cope with the stress and raised her son alone. But the mental damage from having a child so young still scars her today. In school she was bullied for being a ‘slut’ and abused on various social media sites.

Incredibly, Megan managed to take all of her GCSEs but had to wave goodbye to her dreams of becoming a professional dancer. Now Megan, a full time mum, works as a teenage pregnancy peer educator and teaches students about the realities of becoming a teen mum.

Controversially, mother and daughter agree girls as young as 10 should be fitted with implants and want to warn of the impact a baby can have on a teenager’s life. “It was a real shock,” tells Helen, “my daughter was still a child yet was having a child herself. It was hard for me to get my head round but against the odds, Megan has done a brilliant job.”

Megan says: “I’d never heard of the word contraception and I had no idea what condoms were. By the time my school starting sex education, it was too late because I had a baby.

“I think 10-year-olds should be allowed to have the implant if they’re sexually active. If I’d have known about it before I fell pregnant than my life would be entirely different.

“As a society the age of pregnancy is getting younger and younger and although there are good services out there, our youngsters need to be taught about them.

“I think 10 year olds should be given the implant only if they answer certain questions beforehand to make sure the system isn’t being abused.

“It may sound hypocritical of me since I fell pregnant so young, but I was services in place for my son when he grows up. The last thing I would want is for any child of mine to come home with an unplanned pregnancy.

“You can’t imagine the emotional impact it has on your life.”

We placed Megan’s story with The Sun, Woman magazine and This Morning. If you’ve got a story you’d like to share simply contact us using the story valuation form on the right hand side of this page. You can find out more about how to sell a story to the press here: https://www.talktothepress.co.uk/sell-my-story-to-the-press

Paisley Gilmour
← Previous Story Clarke Carlisle attempted suicide… by jumping in front of my lorry
Next Story → We lost it all, and now we live in our car