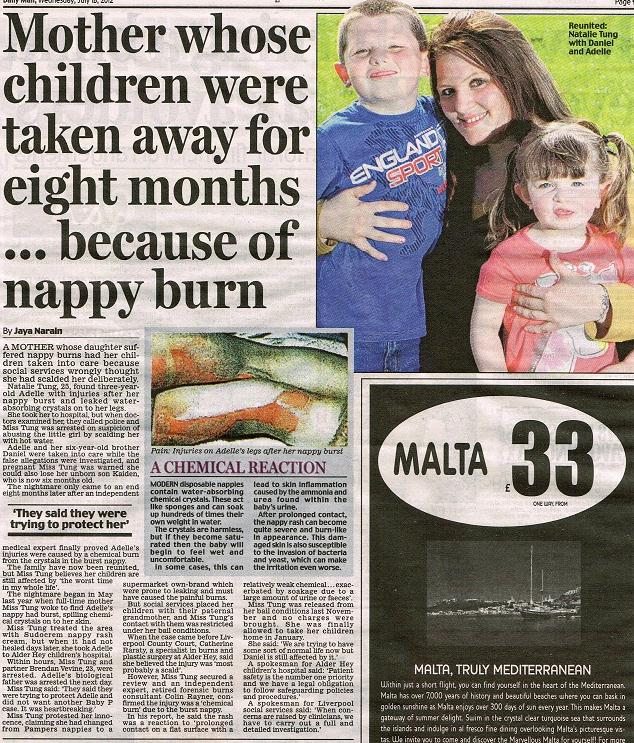 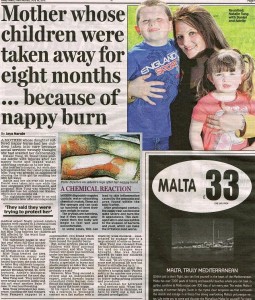 Today, Natalie Tung appears in the national press where she tells of her heartbreak after her two young children were taken away for eight months after her daughter suffered a nappy burn which doctors wrongly believed was the result of child abuse.

Natalie’s shocking story appears in today’s Daily Mail and has also been covered by the Sun, the Mirror and the Telegraph. We are currently in the process of arranging her a magazine deal.

Natalie, 25, from Liverpool, recalls how her nightmare started when her three-year-old daughter Adelle’s nappy burst, leaking water-absorbing crystals onto the toddler’s legs.

Natalie took her to hospital, but when doctors examined her they called police and Natalie was arrested along with her partner on suspicion of abusing Adelle by scalding her with hot water.

Natalie was devastated after her children were taken into care and their nightmare only came to an end eight months later when a medical expert confirmed Adelle’s injuries were caused by a chemical burn from the crystals in the burst nappy.

Natalie, who has now been reunited with her children, says: ‘They said they were trying to protect Adelle and did not want another Baby P case, but it was heartbreaking. We are trying to get on with our lives now.’