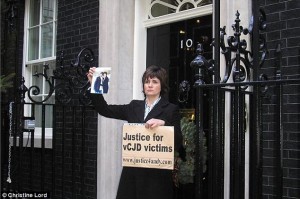 Ever since her son Andrew died in her arms from vCJD, the human form of mad cow disease, at the age of just 24, mum Christine Lord has campaigned passionately to uncover exactly what the government knew about vCJD, and when.

It’s a journey that has taken her right to Downing Street, and seen her write a book named Who Killed My Son – and she’s not finished yet.

Three years before his death, Andrew had been a ­promising radio and TV producer, but by the time he died in his mother’s arms just over a week before Christmas 2007, he was bedbound, blind and had lost his memory.

Christine maintains that vCJD is a time bomb waiting to happen, and fears more lives will be lost.

We’ve been in touch with Christine for many years, and most recently helped her secure coverage in the Sunday Times newspaper. After the article was published, the issue and Christine’s fears were debated in front of the Prime Minister in the Houses of Parliament.

Afterwards, Christine said of our work: ‘Talk to the Press is a highly professional press agency. I found working with them a sensitive experience as I shared deep personal loss and my shocking research. Emily is enthusiastic with boundless energy and is a people person, skills essential for reporting news stories in the 21st century.

Her Sunday Times article about my journey and book has paved the way for ongoing debate in the UK Parliament and has given a voice to thousands of victims of human BSE, including my late son Andrew Black. Thank-you Talk to the Press.’

We will continue to help Christine as she continues to campaign for the truth to be made clear.

If you’re campaigning for a cause that you’d like to see featured in the national press, get in touch with us. You can email us on message@talktothepress.com or fill out the sell my story form on the right. We offer free advice on the best route to gain publicity for a cause.

Talk to the Press
← Previous Story We help brave mum Gemma sell her story to Chat magazine, following brutal attack on her own doorstep
Next Story → Justice after abuse: our brave client shares her story with Take a Break magazine