Publicity for a book? – Talk to the Press helps Rosemary Locock promote her book about her inspirational daughter 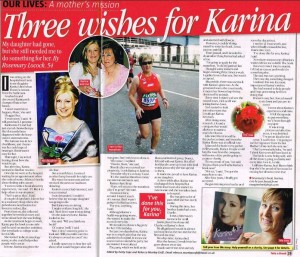 When Rosemary Locock was asked by her terminally ill daughter Karina to complete three wishes, she vowed to fulfil them. Karina said to her mum to promise her she would run a marathon, plant roses on her grave and release the book Karina was never able to finish.

Rosemary, 54, an educational officer, has since run three marathons, had a red rose named after Karina and this month, released her book which is based on notes Karina left behind. And we helped her get publicity for her book by securing her a deal with a women’s magazine.

Rosemary’s beloved daughter Karina was diagnosed with bone cancer in September 2001. She initially complained of pain in her right cheek bone and was first diagnosed with neuralgia and a virus before being referred to hospital where in fact it was discovered she had a tumour. The family were told bone cancer in the cheek bone is extremely unusual, and Karina vowed to fight the disease.

She underwent chemotherapy, and a 17 hour operation to remove the tumour from her face and rebuild the right side of her face using muscles and arteries from her stomach, which left her blind in her right eye. During her battle, her mother says she showed tremendous courage.

Instead of moping around, she started compiling a book of her journey to help other young people battling cancer, which she planned to get published and put into hospitals to help people new diagnosed. She spent hours sitting with a family friend who was unwell, and brushing her hair. Karina thought she’d beaten the cancer, after it appeared to be clear, but in 2003, it returned. When the family received the news the illness was terminal, Karina spent a lot of time selflessly worrying about the effect her upcoming death would have on her family and her brothers, rather than thinking about herself.

Even though Karina was in terrible pain, all she cared about was others. In her last few months the family wanted to make all Karina’s wishes come true. They took a holiday to Thailand, she travelled on the River Thames police boat, and went to Disneyland. But Karina had more wishes which she explained to her mother she’d like her to complete after her death.

Sadly, Karina died in June 2003. At first, Rosemary, who has two older sons Julian, 33 and Justin 31, could not work on fulfilling the promises at first due to her grief. But she says in the midst of the grief, making Karina’s wishes come true provided an anchor. She spent five years working on the book, which she ended up doing from a mother’s point of view.

It now been published and funds raised from its sale will be donated to the hospital that cared for Karina.

Rosemary says ‘I hope Karina is proud. Making her wishes come true has helped me rebuild my life.’

If you’ve written a book, and would like help with publicity for a book, email us on message@talktothepress.com or fill out the sell my story form to the right.