Our client Ellie gets publicity in newspapers – next stop TV! 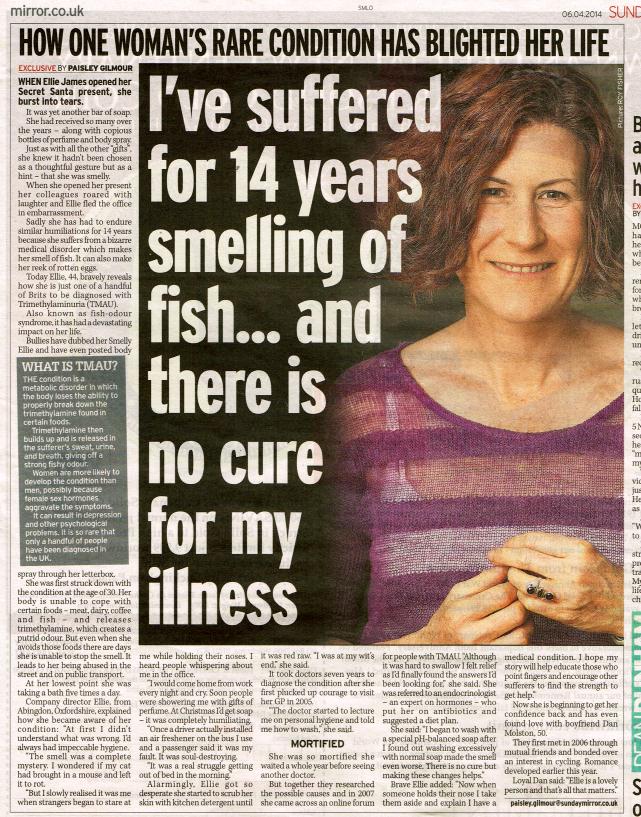 You may have seen our client Ellie James, 44, over the past few days as we’ve got her publicity in newspapers. Ellie suffers from a rare metabolic disorder known as ‘fish odour syndrome’ and smells strongly of rotten egg, urine and fish and wanted to raise awareness of her condition.

She was bullied so badly that it ‘made her life a misery’ and for years she didn’t leave the house. Every day, people at work and on public transport would shout at her, hold their noses and laugh at her smell. She was even nicknamed ‘Smelly Elly’ and had five baths a day and scrubbed her body with kitchen disinfectant in an attempt to get rid of the smell.

Eating certain foods can make sufferers of Trimethylaminuria (TMAU) give off a strong fishy, eggy or urine-like smell because their bodies cannot breakdown timethylamine (TMA). Ellie has to avoid choline and timethylamine-rich foods like meat, coffee, eggs, fish and legumes if she wants to control her eggy odour.

She was so upset and hurt by her workmates nasty comments that she put herself on an extreme diet of mainly fruit to try and control the smell.

Once slightly overweight Ellie dropped four dress sizes and lost three stone on her strict diet because she thought ‘anything was better than smelling like rotten fish and eggs’. But even after losing the weight, the horrible smell was still following her around.

Ellie first noticed the strong smell of urine when she was 30, after a serious bout of cystitis. She walked into her office one day and was taken aback by how strongly it smelt. Ellie thought it was a dead mouse that her cat had brought in and after searching high and low for the culprit, gave up and thought nothing more of it.

It wasn’t until she noticed the whispers in the office and that people had started gifting her with soap, that she realised it was her that was giving off the stench. A cruel neighbour even posted a deodorant through her letterbox. ‘I was a target. People have been really cruel and it’s hideous the way I was treated. I’ve been on a bus and everyone on that bus has been laughing at me’ she said.

Ellie was so distressed by other people’s reactions that she became a recluse and didn’t dare go to the supermarket. Although she went to her GP for help, the disorder is so unheard of that it took her seven painful years to get a diagnosis. After dropping to a tiny size six, Ellie, who has learnt how to control the smell as best she can, has now reached a healthy weight and is a size eight to 10.

She still gets nasty reactions from strangers but has found the confidence to take them aside and explain her medical condition to them. ‘I love my body now and I am really healthy. I know my smell isn’t because of poor hygiene and I’ve learnt to cope with it’ she said. She has even found love with her partner of a year Dan, 50, who is immune to the smell.

We have secured Ellie coverage in a number of newspapers and she’s about to appear on TV too. If you have an issue you’d like to raise awareness about, and you’d like to get publicity in newspapers, email us on message@talktothepress.com or fill out the sell my story form the right.