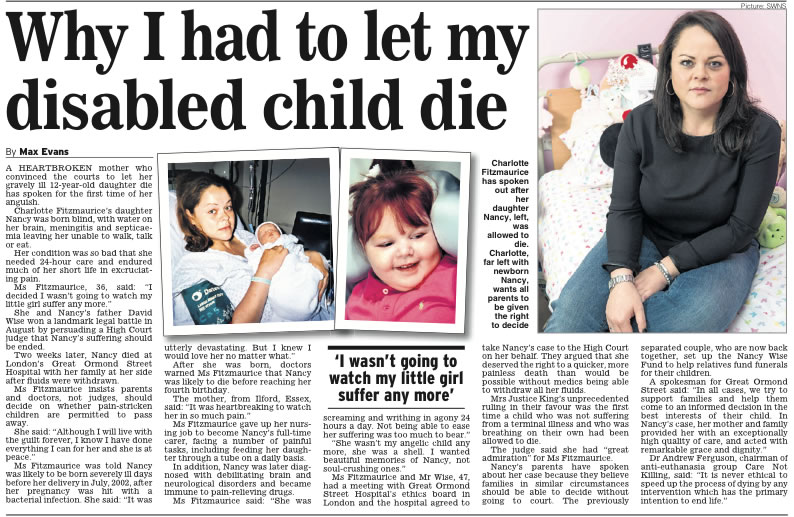 How to Raise Awareness through the Press

If you would like to raise awareness, tell your story, and help others in a similar situation, Talk to the Press is here to help. Not only will we maximize income for you or a charity of your choice, we work with all national magazines, newspapers and TV shows to increase the exposure of your story.

This weekend Charlotte Fitzmaurice’s heart-breaking story appeared in The Sunday Mirror. Today, it also appeared in the Express, The Daily Mail, The Scotsman and several online publications.

Brave Charlotte, 36, from Barking, Essex, won the right to let her 12 –year-old disabled daughter die in a landmark court case after writing a heart-breaking letter to the judge.

The letter read: ‘My daughter is no longer my daughter, she is merely just a shell, the light from her eyes is now gone and is replaced with fear and a longing to be at peace.’ Single mum Charlotte spent 12 years caring for Nancy, who was an inpatient at Great Ormond Street Hospital (GOSH).

Two days before giving birth to her daughter in July 2002, Charlotte was told she carried group B streptococcus and as it had gone untreated, would result in harming her baby.

Nancy was born blind with hydrocephalus, meningitis and septicaemia. Her mother rushed her to hospital at ten days old and a shunt was fitted in her brain. Medics then delivered Charlotte the devastating news that her daughter would only live two to four years.

Nancy was diagnosed with epilepsy at six months old. Unable to swallow, she was fed and medicated through a tube. But Nancy fought to survive and her mother spent 12 years in and out of hospital.

Also suffering from gut failure, she had become intolerant to the cocktail of morphine and ketamine prescribed to help with the pain. Her symptoms were no longer being managed and Charlotte could only watch as her daughter screamed in pain, often for upto 24 hours. Nancy’s development was severely stunted and her level of communication was less than that of a six week old baby.

After a routine operation to have a kidney stone removed, her condition worsened and it became clear to doctors that no more could be done for Nancy. Charlotte attended an ethics meeting with the hospital board and it was decided that they would stop feeding Nancy.

Doctors explained it could take months for her daughter to die but there was nothing more they could do. Desperate to stop her suffering, Charlotte then battled to have her fluids and drugs stopped in order for her to have a quicker, more painless death. 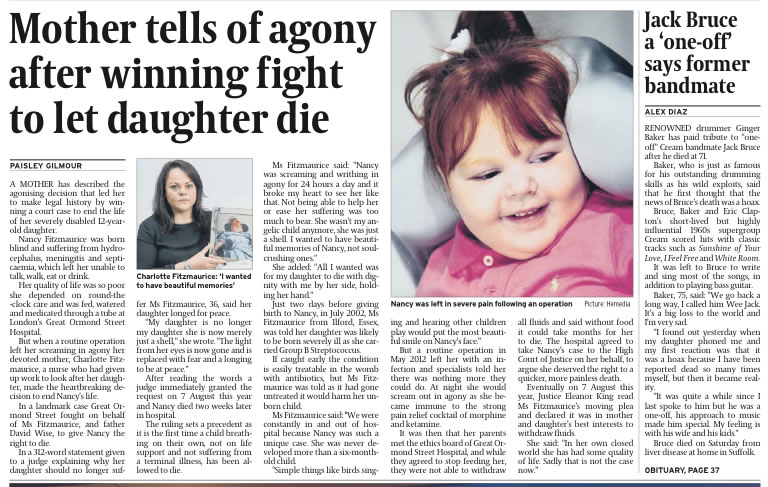 GOSH were unable to give Charlotte this right, but agreed to take the case to the High Court on her behalf. On 7th August, Justice Eleanor King read Charlotte’s statement out in court and instantly declared it was in Charlotte and Nancy’s best interests to withdraw fluids and let her die.

After fluids were withdrawn, Charlotte watched her daughter writhe in pain for 13 days. On 21st August, Nancy died. Charlotte said: “Nancy was my life and I spent every day since she was born caring for her. No mother wants their child to die but I had to do what was right for her. After more than a decade of watching my only child live with excruciating pain, I decided enough was enough.

“As a mother, all I could fight for now was Nancy’s right to die with dignity. Now, I have to live with that guilt forever.”

TTTP feature editor Paisley is going on This Morning tomorrow with Charlotte and is in the process of securing her two magazine placements to help raise awareness about Nancy’s story.

If you’d like help getting your story out there, please email message@talktothepress.com or fill out the form to the right. One of our dedicated writers will get back to you within 24 hours. Please do not contact any other journalists, agencies or publications in the meantime as it may jeopardise any future deals we can secure for you.

Talk to the Press are the country’s leading media agents. To maximise your coverage through Talk to the Press, we can place your story exclusively with one paper and then send it out on our news wires to make sure your story appears in more national papers and gets the best coverage possible. We also work exclusively with the best selling national magazines, and popular television programmes such as This Morning.

You can find more information about how to sell a story to the press here: https://www.talktothepress.co.uk/sell-my-story

Paisley Gilmour
← Previous Story Breaking News Story: Do you have Information?
Next Story → How to Raise Awareness of a Crime