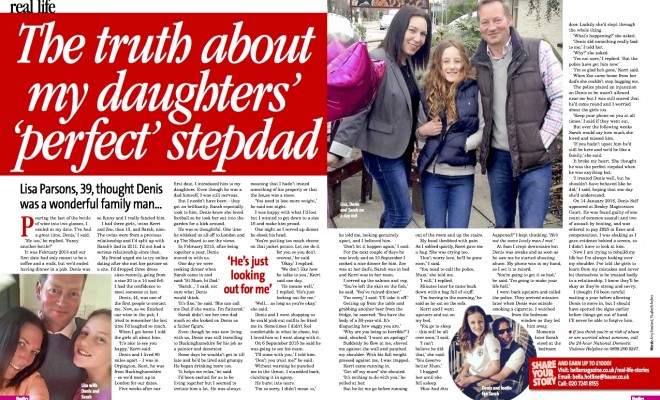 Raise awareness of domestic violence in the press

If you want to raise awareness of domestic violence in the press, Talk to the Press is here to help. All our advisors are trained journalists who will handle your story with the utmost sensitivity.

A few months ago we got a call from Lisa Parsons, who wanted to share her story of surviving domestic abuse. Lisa searched Google to find out how to raise awareness of domestic violence in the press. We were shocked to hear how her dream man had turned into a monster overnight.

Lisa, 39, told us that she’d met Denis, 44, on a dating website in 2014 and they instantly hit it off. Denis swept Lisa off her feet with romantic dinners and soon won her heart.

Lisa explained that she had been single for a few years after splitting with her first husband, and had finally gained the confidence to look for love again after slimming down from a size 20 to a size 14.

At first she was cautious about introducing Denis to her three daughters – twins aged 15 and another girl age 9 – but after dating for more than a month Denis won her trust. Thankfully, her daughters loved him, and as the weeks rolled into months, her youngest daughter Sarah started calling Denis ‘Dad’.

But what should have been a happy ending for hard-working mum Lisa quickly became every woman’s worst nightmare. Soon after Denis moved in with Lisa and the girls, he became grumpy and withdrawn.

The couple started arguing and Denis told Lisa she was fat and her body was saggy – even though she’d worked so hard to get in shape. Then one night, he lashed out and punched her in the throat while he was drunk.

Denis promised it would never happen again. But sure enough, a couple of days later, he flew at Lisa in a rage – pinning her to the wall and punching her until one of her daughters dragged him off.

Brave Lisa called the police and in January 2016, Denis was convicted of one count of common assault and two counts of assault by beating.

Lisa said: “I’m so glad I called the police and Denis was convicted. I want to speak out so that other women and show other women that it’s always better to leave an abusive relationship.”

We helped Lisa share her story in Bella – one of the top women’s weekly magazines – and reach many women who might identify with her story. We ensured that she had full approval of what was written, and that she was paid the highest possible fee.

Lisa said: “Even if one woman reads my story and is encouraged to leave an abusive partner, it will be worth it. Talk to the Press held my hand every step of the way, and I can’t thank them enough.”

If you want to raise awareness of domestic violence in the press, you can call one of our friendly and professional team on 0207 659 6519 or use our Story Valuation form on this page (you only need to provide a few details to give us the gist of what happened).

There is no obligation, our service is free and everything you send us or tell us will be completely confidential until you inform us otherwise. One of our experienced team will guide you through the process from start to finish, ensuring that you get full copy approval and the highest possible fee.

To read more about the story selling process, read our Sell My Story page. You can see a small selection of our recent clients and latest news below: