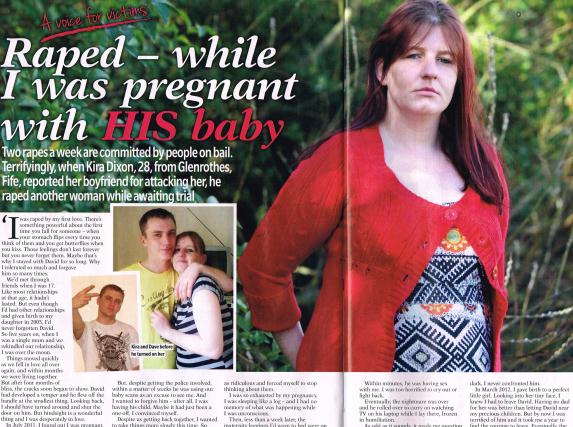 We were thrilled to be able to place 28 year old Kira Dixon’s story with Reveal magazine to highlight their flagship rape campaign.

Kira, from Methilhill, is the main victim of sex beast David McDougall, who shockingly raped a woman just FIVE days after being released on bail following his attacks on Kira. Meanwhile, Kira had been repeatedly raped by her sex-beast boyfriend, even whilst pregnant with his baby.

After finding the courage to report her on-off boyfriend David McDougall, 31, from Fife, to the police he was arrested – but just five days after being released on bail he raped another woman. McDougall, 31, is now facing a long spell in prison after being found guilty of six rapes as well as other serious offences and physical assaults, which date back to 1998 and include kicking Kira in the stomach while she was 6 months pregnant.

Reveal magazine have been running their ‘Report Every Rape’ campaign for a few months now, and are always looking for courageous stories to support their message. Kira felt honoured to lend their campaign her support, and her courage has inspired their readers.

If you’ve got a story you’d like to sell to share to support Reveal magazine rape campaign, contact us on message@talktothepress.com or fill out the sell my story form to the right.

Talk to the Press
← Previous Story Our client Beverley Meredith interviewed by Christine and Holly on ITV’s This Morning
Next Story → I don’t know when my daughter is happy, sad or hurt because she can’t stop smiling – says Mum of brave little girl with Angelman syndrome