Sell a story to Reveal magazine – my GP thought I was a grumpy teen, in fact I had cancer 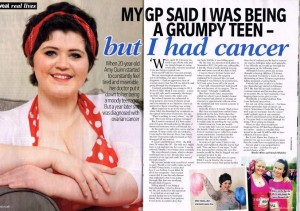 If you’ve been reading Reveal magazine recently, you may well have seen the interview that we placed with our client Amy Quinn, who went through the menopause at the age of 19 after being diagnosed with ovarian cancer.

If you’re wondering how to sell a story to Reveal magazine, we can help secure you a deal with Reveal magazine, and other magazines too. We think Reveal magazine did a fantastic job on Amy’s story (left) and we’re in regular touch with them about other stories they might like!

Having been tired, miserable and in pain for over a year, Glasgow-born Amy’s complaints had been dismissed by doctors and parents alike due to being just 19 years old. But Amy’s life was turned upside down when her symptoms were eventually diagnosed as a rare form of ovarian cancer. As surgeons were quickly forced to remove her ovaries, fallopian tubes and appendix, Amy went through the menopause, and now, aged 20, is infertile.

In 2011, Amy, who was studying Business at the University of Strathclyde at the time, first noticed something was wrong when she started to experience a pain in her left side, and was having constant mood swings. By February 2012, having been to the GP five times, Amy’s pain had become unbearable. She was hardly leaving her bed, apart from when she needed the toilet – which was a lot, due to what she now knows was her tumour pressing on her bladder.

Her GP conceded she might have a cyst. She was sent for a scan, which did show a mass. The doctors confirmed it was a cyst but it was nothing to worry about. However, Amy had a feeling that there was more to it. Amy says, ‘A cyst wouldn’t make me feel so weird all the time, but she wouldn’t listen. It was so frustrating.’

Due to the doctor’s lack of concern over her symptoms, Amy was marked as non-urgent and was forced to wait eight months to have the cyst removed. In November 2012, by the time the operation came round, Amy was feeling worse than ever, and told the surgeon that she had concerns. When she came round from the operation, the surgeon explained that he had removed the cyst and also sent some tissue off for testing, telling her that it was most likely to be an infection. But a few weeks later, she was called in for an urgent meeting.

Amy says, ‘I knew it wasn’t looking good. You don’t just have an urgent call like that from the doctor for no reason. I told my parents that I thought I had cancer, but, obviously, they just thought I was being dramatic. You know when you’re not well though.’ Amy was right, as surgery had revealed she had a rare form of ovarian cancer called Low Grade Serous Carcinoma.

Amy says, ‘Even though I suspected it, actually having it confirmed was horrible. The only words I remember the surgeon saying were “It’s cancer”. My dad and the doctor spent another hour speaking about it, but I wasn’t listening. I couldn’t speak and I felt numb. I don’t think it really hit my dad at first.’

As her cancer had spread so much, surgeons were forced to carry out an emergency operation to remove Amy’s ovaries, fallopian tubes and appendix. This radical surgery meant that Amy was thrown into menopause and unable to have children. The next six months saw Amy going in and out of Glasgow Royal Infirmary for chemotherapy, which meant she had to miss a lot of university.

Amy is now in remission and her hair is growing back. Amy says, ‘I’m happy that the cancer has gone for now, and I’ll do all I can to stay healthy for the future.’

We were pleased to be able to secure Amy a deal with Reveal magazine. If you’ve got a story you’d like to sell to Reveal magazine, email us on message@talktothepress.com or fill out the sell my story form to the right.

And don’t forget, you can sign up to our mailing list by popping your email address in the box below. We regularly send out opportunities to earn money by giving interviews or sharing your opinions with the press.