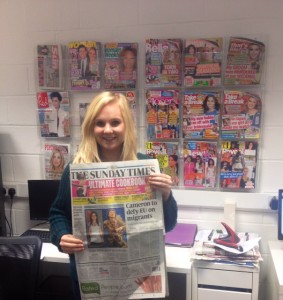 This weekend, TTTP feature writer Emily secured one of our clients coverage in the Sunday Times newspaper. Ever since her son died of vCJD in 2007, Christine Lord has campaigned to raise awareness about the illness and her beliefs that it remains a ticking time bomb for as many as 1 in 2000 Brits.

When she got in touch with us and told us how she felt so strongly about her cause, she’d refused to accept a £120,000 settlement from the goverment, and that she was about to self publish her book, we knew this was an issue that the Sunday Times would be interested in.

After the story came out at the weekend, Christine emailed us and said ‘The article was very strong, and I’m so grateful for the coverage you managed to secure.’

Christine will never forget how during his final lucid moments whilst suffering from vCJD, Andrew looked up at her and begged her: “Find out who did this to me.” Three years earlier, Andrew had been a ­promising radio and TV producer, but by the time he died in his mother’s arms , he was bedbound, blind and had lost his memory. He was killed by vCJD – the human form of mad cow disease BSE – at the age of just 24.

Mum Christine Lord vowed to honour her son’s dying wish, channelling her grief into a five-year investigation to uncover what the Government knew about BSE and when.

She has just released her book Who Killed My Son, and wanted to reveal for the first time how she’s the ONLY relative of a victim of vCJD who has refused £120,000 compensation from the government, as she said it would have felt like accepting “hush money”.

She maintains that vCJD is a time bomb waiting to happen. The shocking statement comes just after researchers discovered twice as many Britons as previously thought could be carrying the human form of “mad cow” disease, variant CJD.

Christine knows more than most the devastating effects vCJD can have. From 2004 until 2007, Christine watched her son Andrew die from the crippling disease. With hindsight, Christine can see that the first signs of what was to come emerged in the spring of 2006, when Andrew began to lose weight. But by the end of the year, he was looking very thin and gaunt. He’d also started spending more time in his dressing gown up in his bedroom. Then, in January, he started to get very nervous while at work. He was doing things he’d done hundreds of times before, but he couldn’t cope.

Concerned about his health and state of mind, Andrew saw his GP. He was diagnosed with depression, given antidepressants (which he did not take) and referred for counselling. Neither Andrew nor his mum believed he was depressed. Soon he began losing control of the muscles in his face, he was dragging his legs as he walked, and his shoulders were becoming hunched up. He stopped taking phone calls and refused to deal with things like bills. One morning he couldn’t even make a cup of tea.

Although the family GP maintained depression and anxiety were to blame, Christine by now already suspected vCJD. Christine stopped working so that she could care for her son and by April 2007 Andrew’s gait was very ungainly and he started having tremors. Over the following weeks, Andrew got worse. He fell asleep constantly and suffered shooting pains in his legs. He was also losing his memory – his skin on his face was red raw because he’d shaved multiple times, forgetting he’d already done it.

In mid-May, Andrew was admitted to hospital for a range of neurological examinations. After ten days of tests, he was diagnosed with vCJD.

By the end of the year, Andrew was unable to go downstairs, eat, or go to toilet by himself. Sometimes his mother would sit him by the window so he could watch the street, but soon he became bedridden. He was no longer aware of his surroundings and had to be fed by bottle.

In the final month of his life, he was unable to move at all and had completely lost his memory. He died on December 16, and as he took his last breath, he opened his eyes and looked straight at Christine. Then he was gone.

Today, Christine, 55, is campaigning for a criminal investigation into the scandal, and has even sold her house so that she can continue her campaign. She says: “What happened to my son could happen to anyone’s child. I don’t know how many people out there have unknowingly eaten beef, and not just that, but also unknowingly eaten contaminated beef. There is still a risk that a generation are carrying the virus. Something needs to be done before people start losing their lives, but the government just want to sweep it under the rug.”

Talk to the Press
← Previous Story Do you want to be on This Morning? TTTP’s Emily escorts our client Lucy Banks onto the This Morning programme
Next Story → Nearly killed by MRSA, but my life was saved by revolutionary copper pyjamas