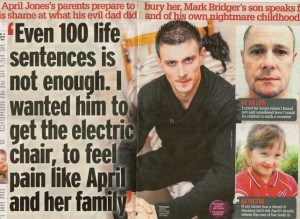 When Steven Verona found out his dad Mark Bridger was responsible for April Jones’ death – his mind flashed back to his horrendous childhood at the hands of his sick father. Heartbreakingly, Steven says he was just a baby when Bridger started to inflict unimaginable pain on him. As Bridger’s first child, Steven thought he’d be loved and cherished, but instead he was beaten black and blue from the moment he entered the world. One time, Bridger kicked him so hard he scarred one of his kidneys making Steven urinate blood.

With April Jones’ funeral on Thursday, Steven wanted to speak out about his own feelings of hatred towards his father, and he contacted us to secure him an exclusive deal for his story.

Steven, who’s now 27 and unemployed, says his mother, who Bridger used to beat and rape, fled from the monster when he was young, terrified he’d kill one of them sooner or later. For years Steven didn’t hear from his father, then in October 2012 his mother, Deborah, called him out of the blue saying, ‘I need to talk to you about your father.’

At the time, Steven says he thought, ‘oh, he finally wants something to do with me.’ But he didn’t. Deborah was calling to say Bridger had been arrested on suspicion of kidnapping and murdering five-year-old April Jones.

Steven says his mind went into meltdown when he found out. He always knew his father was a monster – but he didn’t know he was a paedophile who was capable of murder too.

Now, in the week April Jones is laid to rest, Steven wanted to make his feelings about his father clear. He says: ‘I hate the fact I have the same blood as that monster. I had a horrendous childhood and although I knew my father was a wife-beating bully, I didn’t imagine he’d become a paedophile and child killer. Even 100 life sentences is not enough. I wanted him to get the electric chair, to feel pain like April and her family.’

Steven’s story appeared exclusively in the Sunday Mirror newspaper. If you find yourself caught up in a news event, and would like to secure a deal for your story, email us on message@talktothepress.com or fill out the sell my story form to the right.

Talk to the Press
← Previous Story TTTP helps Louise Pilkington secure multi-media deal (including newspaper, magazine and TV) for her story, following high profile trial
Next Story → TTTP helps Mandy Allwood share her story with the Sunday People newspaper, on what would have been her octuplets 17th birthday