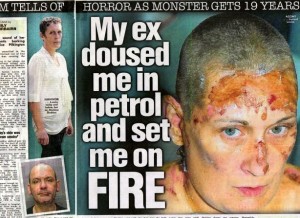 When Louise Pilkington tried to leave her violent boyfriend she thought she was doing the right thing. But the jilted lover returned to her house later that day, poured petrol over her and set her alight.

Last week, evil ex Damian Sheldon, 42, was found guilty at Wolverhampton Crown Court of attempted murder and sentenced to 19 years in prison. Throughout her ordeal, Louise had received a lot of interest and interview requests, and with legal proceedings complete, she appointed us to help her manage the press attention. We’ve helped Louise secure a multi-media deal for her story, that includes an interview with the Sun (published on Saturday), a TV appearance and magazine interviews.

In March 2012, Louise met Damian at her local pub. At first, she says she wasn’t attracted to him, but he kept persisting so she ended up going out with him. For the first few months everything was fine, but soon Damian, a cable layer, became controlling and jealous. He made her leave her job as a carer in an old people’s home. Soon Louise’s relationship with her mum, dad and brother became strained as they didn’t like Damian.

One afternoon, he head-butted her during an argument – giving her black eyes. Her family begged her to leave Damian but she says she was lonely and kept hoping he’d get anger management and change. But in December 2012, she’d had enough of his constant abuse so she told him it was over.

That evening, Louise says her dog Jess woke her up by barking, she went downstairs and smelt petrol. To Louise’s horror, Damian was outside. She tried to push him away but he grabbed her nightie and tipped petrol over her head. Louise started to shout ‘no, no no’ but Damian ignored her and set her alight.

Afterwards, Louise was in hospital on the burns unit for three weeks – where she underwent skin grafts and counselling. She says Damian’s never shown any remorse and wouldn’t look at her in court.

‘My life will never be the same again,’ says Louise, who used to work in a care home. ‘I think about it every day and had to leave my old house as there was too many bad memories there. I’m trying to rebuild my life now and have applied for a job helping people with learning difficulties. I don’t think I’ll ever be able to trust a man again though. I lost all my hair in the fire, I’m just glad my face isn’t scarred.’

If you’re the victim in a high profile court case, and would like help managing press attention, email us on message@talktothepress.com or fill out the sell my story form to the right.