Sell a celebrity video to the press

Would you like to sell a celebrity video to the press?

If you have photo or video evidence of a celebrity or sports star getting up to no good your story could be worth thousands. Due to the shift in online journalism, videos have never been in more demand.

Our story appeared in The Daily Sunday Star after Gaz Beadle was caught on camera snorting white powder from a Ferrari key.

He sniffs what appears to be cocaine then pulls an impression of Jim Carrey’s character from the Hollywood blockbuster The Mask.

As our tipster had video evidence, the value in the story went up dramatically – meaning our tipster received thousands for the video. Without a video or a clear picture, it can be difficult to stand up a story as there’s no proof – despite the story being likely to be true. Our source close said: “It’s well known Gaz loves to party, so I can’t imagine it’s baking soda he’s snorting.

“On TV he’s known for constantly boozing and being a party animal – but this takes things to the next level. The fame has gone to his head.”

Gaz, 27 – who has reportedly rekindled his on-off relationship with MTV co-star and Big Brother winner 2013 Charlotte Crosby, 25 – was getting festive with friends in December 2014 when the video was taken. The damning footage – which was shot on a mobile phone and leaked on WhatsApp – was reportedly filmed in a Manchester hotel.

At the start of the clip, Gaz zooms in on a red Ferrari key which has a line of white substance on it. In the background, an array of powders and white substances are littered across the desk.

Seconds later, playboy Gaz holds the key to the camera, before snorting the powder off it while a pal looks on. The reality star – who has appeared on all 11 series of the hit MTV show – shudders and grins at the camera. 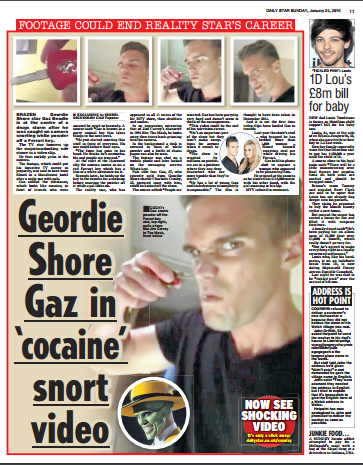 Gaz then turns to pull a face over his shoulder – in an expression mirroring Jim Carrey’s ‘showtime’ character in the 1994 film The Mask. Meanwhile, a friend smirks in the back of the shot as the camera pans away. The source added: “The face Gaz makes at the end of the video looks just like Jim Carrey’s character, The Mask.

“It’s uncanny how much he looks like him. Maybe it’s a nod to the film character’s famous catchphrase – ‘Somebody stop me!’”

The Hexham, Northumberland-born pin-up shot to fame after appearing in MTV hit showGeordie Shore in 2011. The latest footage, lasting 13 seconds, could however land him in serious trouble with show bosses – and the police. A source said: “Since appearing in Geordie Shore, Gaz has been on a complete power trip. It’s obvious in the video that he thinks he’s invincible. Fans of Geordie Shore know he’s a party boy and womaniser, but this takes it to the next level.

“It’s completely irresponsible. He’s got teenage fans who look up to him and think he’s the man after watching him on GeordieShore. Gaz is sending out a message to young fans that his behaviour is ok and something to aspire to. He thinks he’s an A-list celebrity, but all he’s done is appear on a reality TV show.

“The fame has gone to his head, and now he thinks he can get away with anything.”

Do you have a video or a picture and want to know how much it’s worth?

If you’ve got a video or a picture of a celebrity getting up to no good, contact us using the Story Valuation form on this page, or call 0207 549 5406 to find out more. You can read more about the story selling process on our Sell My Story – How it works page.

See a selection of Talk to the Press’ recent clients below…

Georgette Culley
← Previous Story War veteran reveals to the Sunday Star that he is a male domestic violence victim
Next Story → Do you have an anonymous newspaper tip-off? We’ll pay you for it!