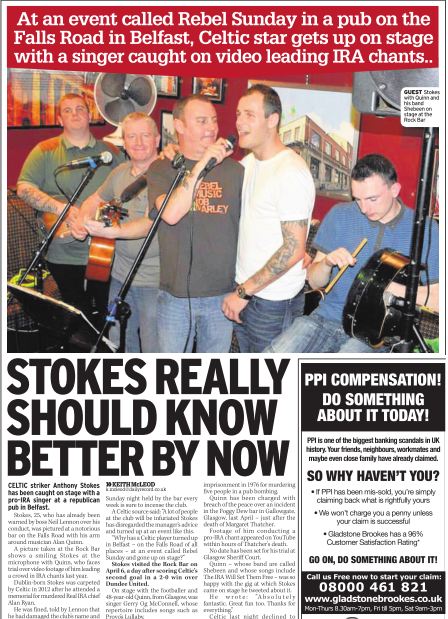 When a tipster got in touch with us saying he had photographs of Celtic footballer Anthony Stokes on stage with a pro-IRA singer at a republican pub in Belfast, we knew a newspaper would be interested.

Stokes has already been warned by his boss Neil Lennon over his conduct was pictured with his arm around musician Alan Quinn. Today, the photograph and story supplied by the tipster, who has remained anonymous, appears in Scotland’s Daily Record newspaper.

Stokes was warned by Lennon not to damage the club’s name and to stay away from pro IRA events, meaning his attendance at the Rebel Sunday night held by the Belfast bar is sure to incense his club.

If you’ve got a story about a footballer you’d like to sell, or if you want to sell a story to the Daily Record newspaper, get in touch by emailing us on message@talktothepress.com or fill out the sell my story form to the right.

Talk to the Press
← Previous Story Flowers for TTTP deputy editor Georgette as a thank you from a client!
Next Story → Our families warned us we were mad – but we love our Tunisian toyboys!