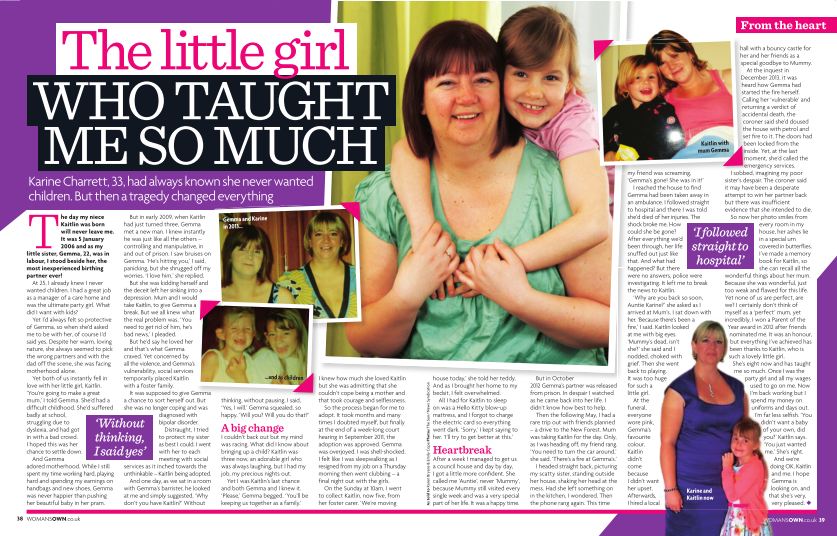 If you’ve got a copy of this week’s Woman’s Own magazine, have a read of our story with the inspirational Karine Charrett.

When social services removed Karine three-year-old niece from her bi-polar sister’s care, she knew she had to change her partying ways so she could adopt her. Desperate not to let her go into foster care, Karine, now 33, stopped going out and partying until the early hours of the morning every weekend with her friends.

What’s more, instead of splashing her cash on handbags and party dresses, she bought parenting books, learnt to cook and clean, and started researching good schools in the area.

In 2011, after months of interviews with social services, Karine won guardianship of little Kaitlin, now 7.

Her sister, who suffered from bi-polar and a personality disorder, was delighted that her daughter would be staying with her auntie and would visit every week. Tragically, in May 2013, Karine’s troubled sister died in a house fire. Today, Karine is still Kaitlin’s sole carer and has since won a parent of the year award through her local radio, Spirit FM.

As soon as we heard Karine’s story, we knew a newspaper or magazine would be interested. And we secured her a deal with Woman’s Own magazine. We’re hoping to get her further coverage in a newspaper too.

She says: ‘Adopting Kaitlin was the best decision I ever made. It’s funny because I used to be a party girl. My friends still call me the ‘disco diva.’ I loved drinking and staying out late clubbing, and didn’t think I would have children until a lot later in life. Now, I’m a sensible mum with an eight-year-old daughter. All my wages used to go towards me, but now I have to get uniforms and things for Kaitlin. She has helped me be less selfish.

‘When I first looked after Kaitlin it was a nightmare. I couldn’t take her anywhere because she cried all of the time, but we worked together and now she is a lovely, happy little girl. We miss Gemma everyday, but I try as hard as I can to be the best mum I can be to Kaitlin’

If you’ve got a story you’d like to sell to Woman’s Own magazine, email us on message@talktothepress.com or fill out the sell my story form to the right.