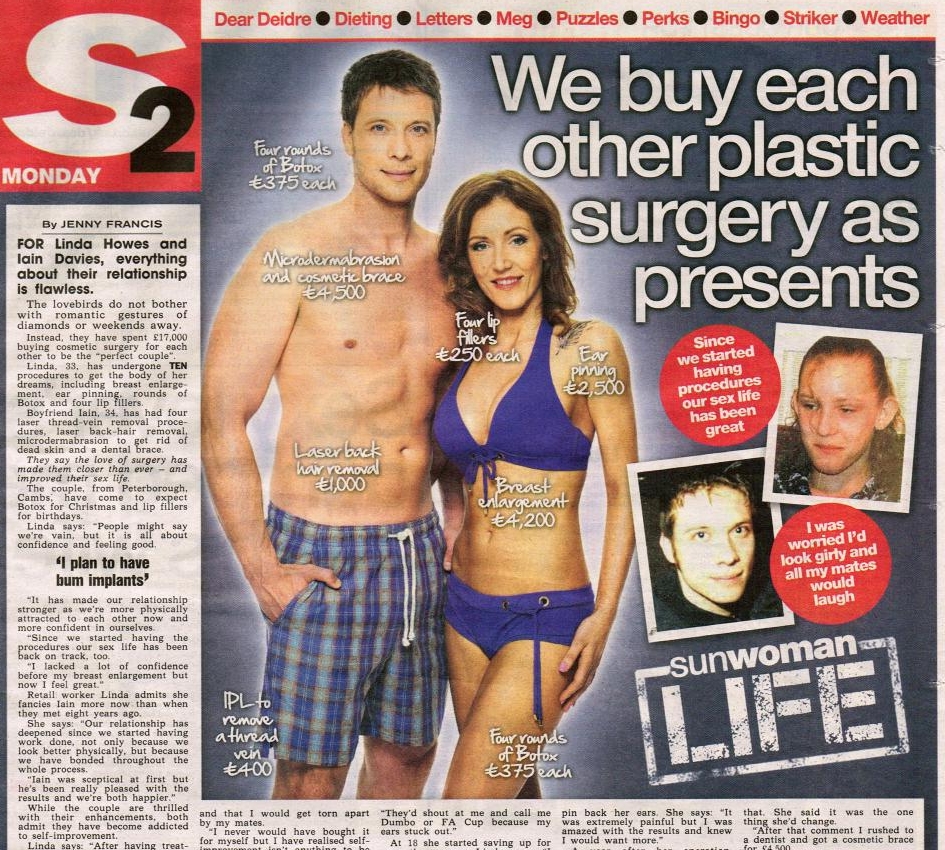 If you’ve got a copy of the Sun today, check out our clients sharing their cosmetic surgery story on page 35. Iain Davies, 34, and Linda Howes 33, refuse to buy each other chocolates and flowers for Valentine’s Day and instead splash out on cosmetic surgery to make themselves look like the perfect couple.

They even gift each other with Botox every Christmas and birthday, and have spent more than £12,000 on cosmetic surgery in the last three years. The couple, from Peterborough, understand the need to look their best and are supporting each other on the painful path to perfection.

Client director Iain is a self-professed ‘man’s man’ who had never considered going under the knife until he met the love of his life seven years ago. Linda, who works in retail, was nicknamed ‘Dumbo’ and ‘FA Cup’ by school bullies who taunted her for having ‘massive sticky out ears’. The cruel playground jibes haunted her so much that she resorted to surgery aged 24 to have her ears pinned back. She quickly developed a taste for self-improvement and had a breast enlargement at 29 because her B cup boobs gave her a lack of confidence and low self-esteem.

When Iain bought his girlfriend Botox for Christmas in 2011 he was unaware that she had also booked him in for the same procedure as a surprise.

‘I was worried when she said she wanted her boobs and lips done. I really didn’t want her to look fake or have a trout pout. She’s a bit crazy but she looks absolutely amazing now. My friends and brother took the mickey out of me for ages after I had my first round of Botox. I would never have thought in a million years that I would be so into looking sharp, but it’s nice to hold onto your youth,’ Iain says.

If you’ve got a cosmetic surgery story you’d like to sell, email us on message@talktothepress.com or fill out the sell my story form to the right.

Talk to the Press
← Previous Story TTTP book on Sunday Times best-seller list!
Next Story → I adopted my sister’s child and am raising her as my own – our client shares her inspiring story with Woman’s Own magazine