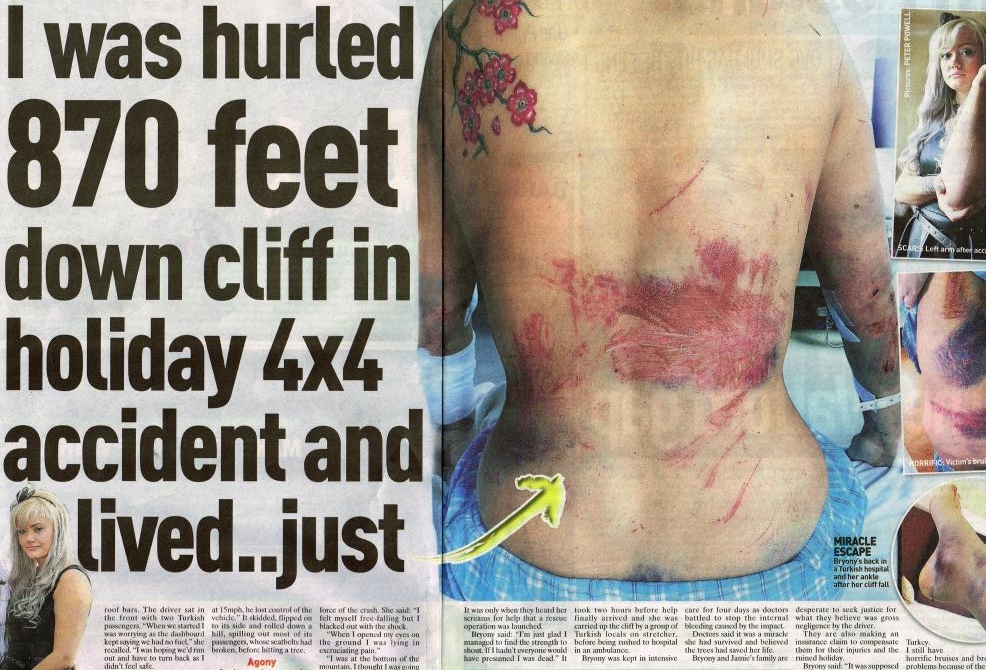 When Bryony Fitzpatrick, 21, went on holiday to Turkey, she was looking forward to a romantic break with her boyfriend and his family. But just two days into her trip she was left fighting for her life after their Turkish safari driver crashed the jeep because he was TEXTING while driving.

Bryony’s seat belt came undone with the impact and she was thrown 260m down a cliff, and only survived because she landed in a tree. The 21-year-old shop worker was rescued two hours later by a Turkish hunter who managed to scale to cliff to rescue her.

When she contacted us with her holiday from hell story, we knew a newspaper would be interested, and we secured her a deal with the Sunday People newspaper. While lying bruised at the bottom of the cliff, Bryony was sure she was going to bleed to death. She was taken straight to hospital and suffered internal bleeding and severe bruising, as well as sprained ankles which have left her unable to walk. Doctors said it was a miracle she survived – if she hadn’t landed in a tree she would have broken her neck.

Now, Bryony is back at home but still suffers flashbacks of her holiday from hell, and is unable to work for another month because of the bruising. She was taken to hospital where she stayed for four days in intensive care as doctors battled to stop the internal bleeding. To add to her holiday from hell story, Bryony wasn’t allowed to fly home until she was out of hospital for four full days.

Bryony: ‘It was terrifying, one minute I was in the jeep the next I was falling down a cliff. I thought I was going to die, all I could think about was that I was going to die at the bottom of the cliff. It was supposed to be a dream holiday with my boyfriend, but it turned into the holiday from hell because the driver was texting. He could have killed us all. I can’t believe it is legal to drive and use your phone in Turkey, especially while doing a tourist trip. It’s outrageous.’

If you’ve experienced a holiday from hell, and would like to sell your story, email us on message@talktothepress.com or fill out the sell my story form to the right.