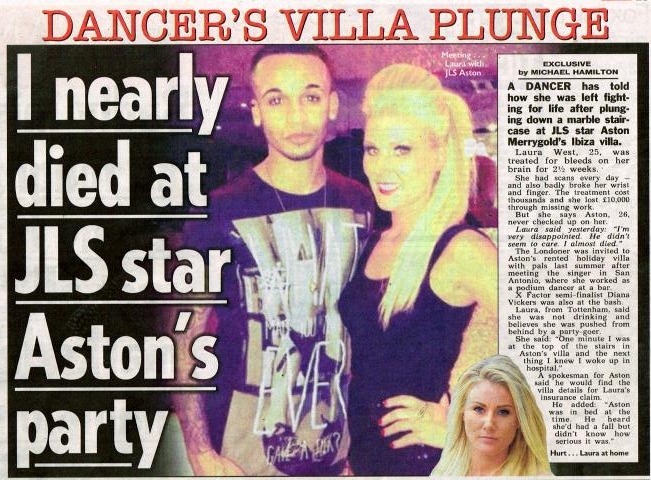 When Laura West googled ‘sell my story’ and got in touch with us, we knew a newspaper would be interested in what she had to say. Laura, a dancer, was left fighting for her life after plunging down a marble staircase at JLS star Aston Merrygold’s rented Ibiza villa.

Following the fall, Laura, 25, was rushed to hospital in Ibiza where she slipped into a coma for five days. She was diagnosed with a broken right arm and wrist, a fractured skull and was treated for bleeding on her brain for nearly three weeks.

The treatment, which she had to pay for privately, cost £23,000 and she lost £10,000 through being unable to work. She said: “I woke up to find out I’d smashed my head open on a marble staircase. My friends say they found me in a pool of blood at the bottom of the stairs.”

Laura has no idea why the part ended in such a horrible way or why she fell down the stairs, but she maintains she was not drunk. And she says Aston, 26, never checked up on her.

We spoke to several newspapers on Laura’s behalf and were able to secure an exclusive deal with the Sun. Even now, Laura suffers from short term memory loss and distressing blackouts. “I contacted Aston a number of times but never heard anything back. I thought we were friends and he was a nice guy but I haven’t heard from him since,” she says.

A spokeswoman for Aston said he would find the villa details for Laura’s insurance claim. He added: “Aston was in bed at the time. He heard she’d had a fall but didn’t know how serious it was.”

If you’ve got a story you’d like to sell to a newspaper or women’s magazine, email us on message@talktothepress.com to find out more.