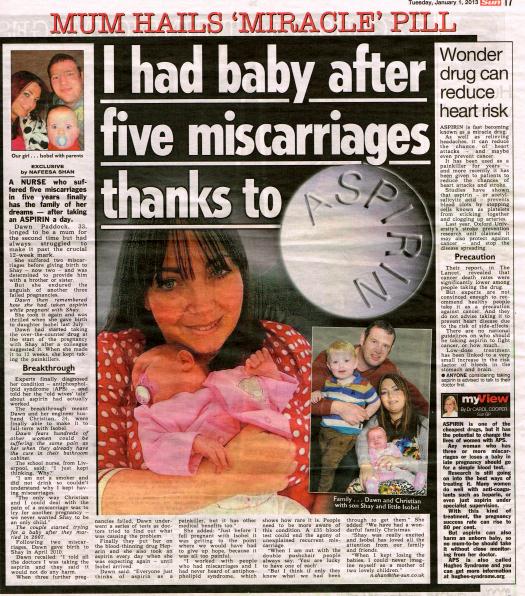 As soon as we heard Dawn Paddock’s story about her miracle baby after enduring five miscarriages, we knew a newspaper would be interested. Especially given it was all thanks to aspirin that Dawn was finally able to carry a pregnancy to term.

Dawn, 33, a nurse from Liverpool, and her husband Christian, 34, are celebrating the birth of their baby daughter Isobel, who is now seven weeks old. But Isobel, a little sister for couple’s son Shay, two, is the miracle baby they had feared might never arrive, because over the last five years Dawn has endured the heartbreak of suffering five miscarriages.

The couple started trying for a baby soon after they got married in 2007, and Dawn was thrilled when she fell pregnant just three months later. But the pregnancy ended in heartbreak when Dawn had a scan at ten weeks and was told there was no heartbeat.

For Dawn, it came completely out of the blue as she was only 28 and had no medical problems she was aware of. But she knew how common miscarriages were and was determined to keep trying. But it took Dawn another two years to get pregnant again. The couple had just been referred for IVF when she conceived naturally.

The pregnancy started off fine but, in July 2009, Dawn started bleeding. She was devastated when she was told she had miscarried, again at ten weeks. She feared it would take another two years to fall pregnant, if at all, so she was overjoyed when she found out she was pregnant again just three weeks later.

Shay was born in April 2010 and Dawn put her miscarriages down to bad luck. Shortly after she discovered she was pregnant again. The couple hadn’t planned on having another baby so soon but she saw it as a blessing as it had taken her so long to get pregnant before.

But she was distraught when the pregnancy ended in heartbreak yet again. In September 2010, when she was nine weeks gone, Dawn was told she had a molar pregnancy, where the placental tissue fails to grow into a baby and forms a tumour. She had it removed and was told to wait six months before trying again in April 2011. Amazingly she fell pregnant immediately.

After four miscarriages, Dawn was understandably worried, but as she approached the three month mark she prayed the danger was over as her other miscarriages had happened at ten weeks. But at her 12 week scan Dawn got the news she had been dreading, that there was no heartbeat. It was her fifth miscarriage and she was distraught.

Dawn even had to change to another ward in the hospital she worked in as she worked in the gynaecological ward and couldn’t cope with seeing pregnant women every day. She says it was a constant painful reminder of what she’d lost.

Throughout this time Dawn underwent several hospital tests which all came back normal. The doctors said the losses were unexplained and to keep trying but Dawn couldn’t understand why she kept losing her babies. But a breakthrough finally came when Dawn’s doctor referred her to Liverpool Women’s Hospital and she was diagnosed with antiphospholipid syndrome, a blood clotting disorder which can result in miscarriage or stillbirth.

Dawn says it was amazing to finally have a reason for her miscarriages but she felt desperately sad they could have been prevented with a simple blood test. She says all women with a history of miscarriages should be tested for the disorder. Incredibly, just four days after her diagnosis, Dawn found out she was pregnant again. This time doctors put her on the blood thinning drug Heparin and she also took an aspirin every day, which she had heard could stop miscarriage.

She credits the aspirin with getting her to full term, as she had also taken it with Shay but stopped when she read that it could be harmful. In June Isobel was born five weeks prematurely after Dawn suffered from placenta previa, which she believes may have been caused by all the miscarriages.

Dawn would like more children but doesn’t know if it will be possible. She has had to have a D&C five times and it’s taken its toll on her body. But she says she’s so happy to have two beautiful children. If you’ve had a miracle baby against all odds, and would like to share your story, email us on message@talktothepress.com