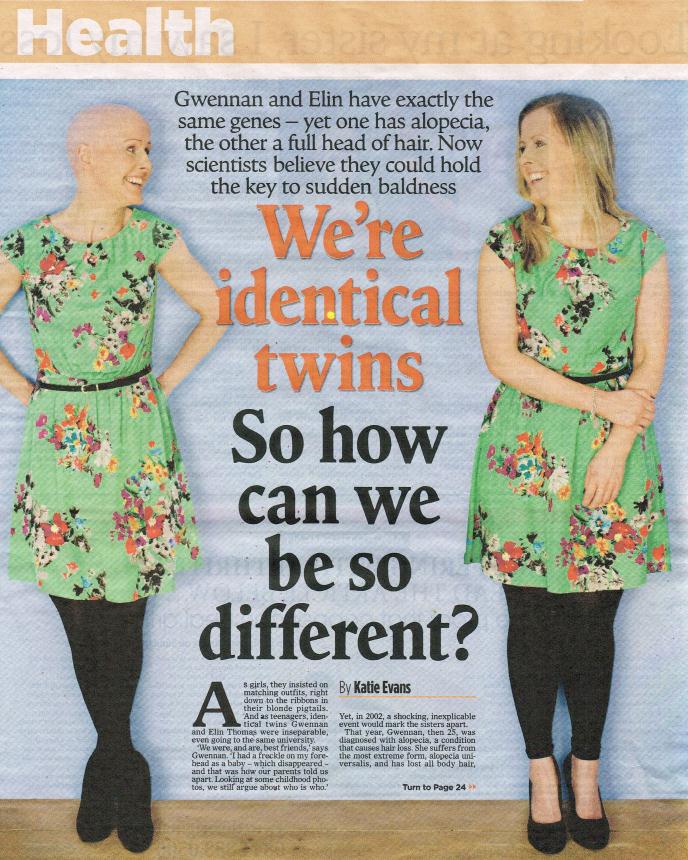 Courage of the identical twin who embraces baldness, whilst her sister retains a full head of hair 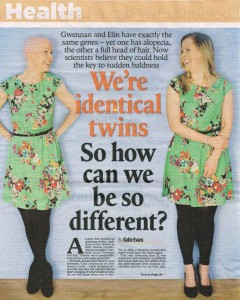 Identical twins Gwennan and Elin, 35, from Cardiff, say that people could never tell them apart when they were growing up. But distinguishing between the two is far easier now – because, while Elin has long flowing locks, Gwennan is completely bald.

Gwennan suffers from alopecia, where the immune system attacks the hair follicles, and she suddenly lost all her hair at the age of 25. Doctors say it could have been triggered by lifestyle factors, such as stress, but there is often a genetic link too. But the twins are baffled because Elin has never shown any signs of developing the condition and she has a thick head of hair.

They have always been very close but Gwennan admits it put a strain on their relationship as she was envious of her sister, while Elin felt terribly guilty. But eventually the pair worked through her problems and, with the help of counselling, Gwennan came to terms with her new look.

She has been told her hair is unlikely to ever grow back and two years ago she decided to ditch the wig and embrace baldness. The twins will never know what caused Gwennan’s alopecia but she says the most important thing is that she has come to love her look.

Gwennan says it’s such a part of her identity now that, given the choice, she doesn’t even know if she’d want her hair to grow back. We knew as soon as we heard their story that there would be interest in it, and this weekend they appeared in the Mail on Sunday. We’ve also placed the twins’ story in Bella magazine.

If you’ve got a story you’d like to sell to the Mail on Sunday or any other national newspaper, email us on message@talktothepress.com or fill out the sell my story form to the right.

Talk to the Press
← Previous Story Is this Britain’s bravest headteacher?
Next Story → I thought I’d be childless forever – now I’ve got miracle triplets thanks to a surrogate mother