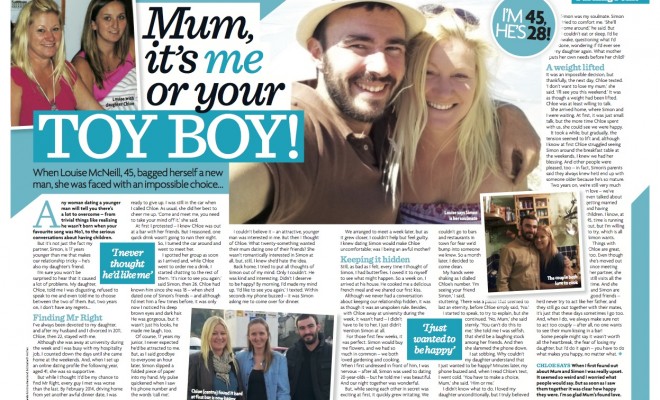 Are you dating a younger man or woman or have you found love in an unusual place? If you’ve seen similar relationship articles in the press and have thought ‘I’d like to share my toyboy relationship story, and get paid for it’ – Talk to the Press will help you tell your story, your way, and get you the maximum payment for your story. Magazines love sharing relationship stories.

Maybe you have you got a different confession to make? We consider all stories. Sell your story with Talk to the Press and we’ll ensure that you get the highest possible fee.

This week we shared the story of Louise McNeill, 45, a British ex-pat who found love in the arms of a French toy boy – who happened to be one of her daughter’s closest friends.

We were captivated by her tale which proves that sometimes a toyboy is for life – not just a midlife crisis. What’s more, we knew the women’s weekly magazines would love it too.

Louise moved to the idyllic French countryside back in 2007 with her then-husband Alex, and her two youngest children Chloe and Finlay. But sadly, her marriage crumbled after two years in France, and she spent the best part of five years single.

Although Louise had dated men her age who were also ex-pats in France, none of the relationships had been a good fit. Louise was starting to think she might never find love again, when she met one of her daughter’s friends – a handsome Frenchman called Simon.

Simon was one of Chloe’s best friends, and at 27, was much closer to Chloe’s age than he was to Louise’s. Nonetheless, the pair hit it off and spent three weeks having steamy rendezvous without telling Chloe.

When Louise finally plucked up the courage to confess her secret to her daughter, Chloe told her the relationship was disgusting and asked her Mum to choose between Simon and her.

Naturally, Louise was devastated but Chloe gradually came around to the idea when she saw how happy her Mum and Simon were together. Now Simon has moved in with Louise and helps her with her business renovating properties.

Louise said: “At first I thought me and Simon would just be a fling, but he’s got a sensitive, caring side and has really won my heart. He’s so much more mature than a lot of men my age – I think we’ll stand the test of time.”

After we heard Louise’s story, we got in touch with our close contacts at the women’s weekly magazines and secured Louise an exclusive deal with Chat magazine, followed by a second deal with Woman magazine.

In the coming weeks, we also hope to secure Louise a deal with one of the women’s sections in the national papers.

Because of the sensitive nature of Louise’s story, we ensured she got to approve every word which was written about her, and also secured her the highest possible fee for both stories.

Louise said: “Talk to the Press have worked really hard on by behalf, and I’m really grateful for their help.”

If you found love in an unusual place, or have a confession to make, get straight through to our team of trained journalists by calling 0207 549 5419 or contacting us using the Story Valuation form on this page. You don’t need to tell us your whole story now, just a few bullet points to give us an idea of what your story is about. We’ll be able to provide a close estimate of what your story is worth. There is no obligation and anything you send us is 100% confidential until you say otherwise.

We’ll advise you which magazines or newspapers would be the best place for your story and fight to make sure you’re offered the highest possible fee. To read more about how we sell stories to the press you can see our Sell My Story – How it Works page.

Here are a few of our latest clients…

Georgette Culley
← Previous Story Sell a story about my pet: Get paid for sharing a cute animal story
Next Story → Raise awareness of domestic violence in the press