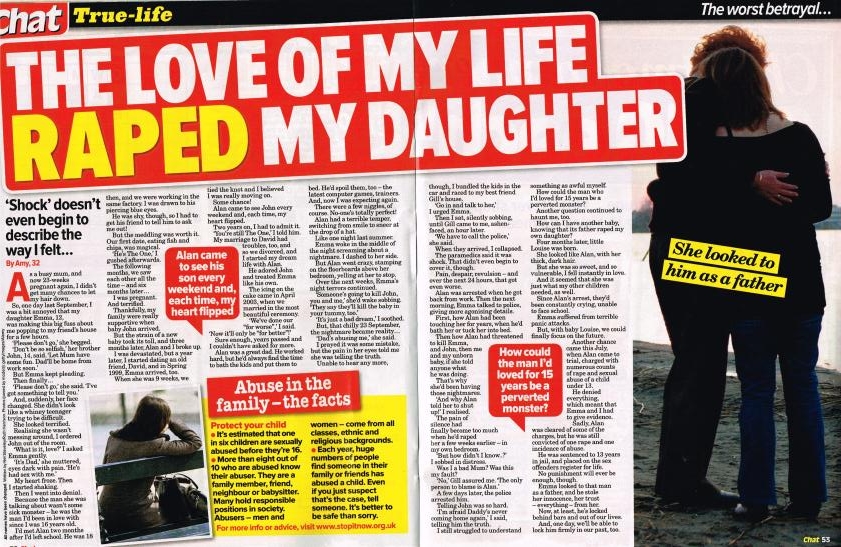 The love of my life raped my daughter 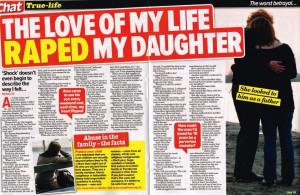 Amy, 32, had her heart ripped out when she discovered that her beloved partner of 16 years had raped her 13-year-old daughter. Ironically, her vile husband, who worked with paedophiles, used to come home from work and tell her about the awful crimes that paedophiles commit, whilst at the same time, abusing Amy’s daughter. This week, her story appears in Chat magazine.

Amy first met Alan at work when she was just 16 years old. The couple had a son, now 15, but split up shortly afterwards due to their young age. Amy went on to have a daughter, *Sally, now 13, but no one compared to her first love.

In 1999, the couple married and Alan treated *Sally like one of his own, calling her his princess. Amy and Alan had another little girl, now 7, and from the outside, they looked like any other normal family.

But just weeks before Sally’s thirteenth birthday, she became quiet and withdrawn. And in September 2011, Amy’s world fell apart. As she was getting ready to go out with some friends, Sally collapsed into floods of tears, begging her not to leave. Amy says that Sally then told her the truth that her daddy ‘hurt her’ when she wasn’t around – starting as young as four.

Devastated, Amy learnt that Sally had been raped in her bedroom just weeks before. Alan had threatened Sally telling her that if she didn’t keep it a secret, he’d kill her whole family – including the unborn baby inside her mummy’s tummy.

At Norwich Crown Court, Alan denied all charges forcing Amy to give evidence. He was sentenced to 13 years and banned from ever working with children.

Amy says: “He was the love of my life and now, he sickens me. Alan used to stand in our kitchen and tell me about the gruesome crimes that the men he worked with had committed, and all the while, he’d been hurting my innocent daughter. Sally suffers with nightmares and has been diagnosed with PTSD. How can I ever make this better for her?”